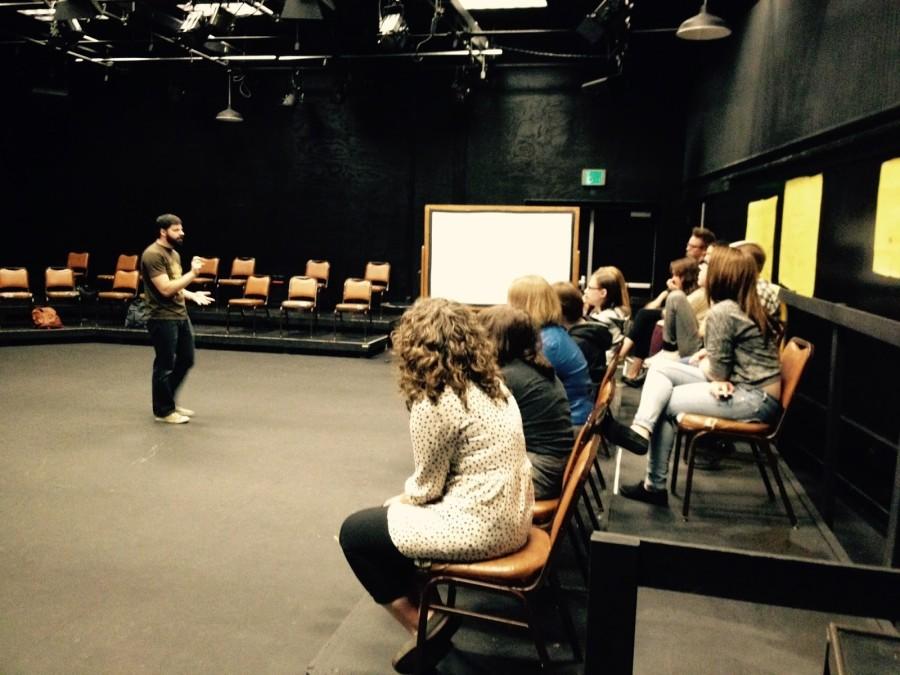 Aden Kirschner and Eric Nepom, professional actors and improvisers from Portland, lead improv workshops available for all students after school. The Improv Troupe meets twice a week throughout Oct., culminating in two performances on Nov. 13 and 14.

With Twenty minutes for warm-ups and no script to go off of,  every decision the actor makes has to be executed with confidence. Public speaking is a common fear for some, however, Laurel Sleeper, junior, is an experienced ad-libber.

Sleeper’s been attending improv festivals ever since starting high school, and hopes to further her skills in unscripted theatre by taking part in the Improv Troupe. The troupe meets up to two a week to learn improv skills from Eric Nepom and Aden Kirschner, professional improv actors and comedians in Portland??. The troupe will showcase what they have learned with two performances on Nov. 13 and 14.

“We’re all at varying levels of experience but we’re hoping to grow as a troupe and make something really cool,” Sleeper said.

“I’ve worked a lot more with scripted theatre, so I feel more comfortable with it,” Sleeper said. “That’s why I want to do the improv classes here. Even though we don’t have a script and a scene to work on and polish, I want to sharpen those skills so I can keep as proud of my improv work as I am with my theatre work.”

While reliance on scripts can be helpful for some actors, scripts can also be more of a nuisance, especially for Trinity Siefer, sophomore.

“Improv isn’t as scary for me because I tend to forget lines anyway,” Siefer said. “But improv definitely takes more thinking than just memorizing a script.”

Taking a great variety of electives, Siefer wants to be sure of her choices. She’s chosen different classes each semester from journalism to acting.

“I’m trying to get a variety of types of classes. But so far, I like acting because it’s an active class,” Siefer said. “I’m trying it out because people said I would be good at it and I thought it would be fun.”

Sleeper, dedicated to solely theatre classes, acted in “Joseph and the Technicolor Dreamcoat,” “The Love of Three Oranges,” and “Caesar,” as well as follow-spot operator for “Into The Woods.” Though she will take a more backstage role for this year’s musical, she is excited to tech for “The Music Man.” The inspiration for such an extensive dramatic-resume comes from close to home.

“My older sister made me want try acting,” Sleeper said. “She’s my best friend and inspired me to start classes in middle school and join the Thespian Troupe.”