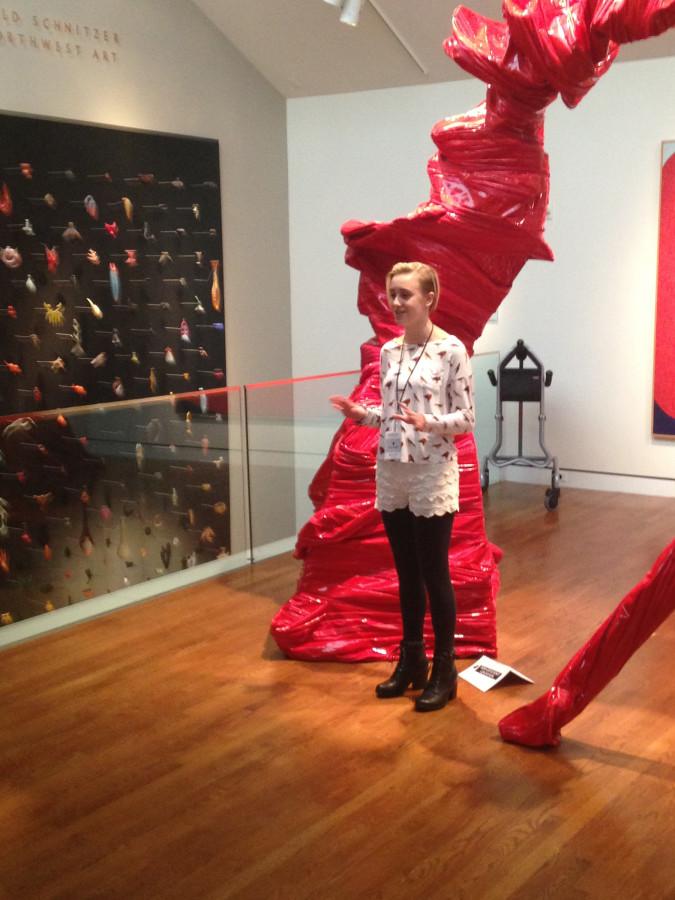 Laurel Sleeper, junior, performs at Wordstock on Nov. 7 in the Portland Art Museum. Sleeper performed ‘The Applicant’ by Sylvia Plath and ‘Her Kind’ by Anne Sexton. Kate Walters and Riley Knowles, juniors, performed at Wordstock as well.

Before walking into the Portland Art Museum, Kate Walters, junior, expected to see small groups listening to a performer, accompanied by a mellow, informal vibe. To her surprise, Wordstock, Portland’s annual Book Festival, was much more.

“Wordstock was way bigger than I had expected,” Walters said. “People were assigned rooms to perform poetry in and it was pretty crowded. We had to park a mile away from the building because there were so many people there. I was not expecting it to be as formal of an event.”

Walters performed “Conversation” by Ai on the fourth floor of the building under a large red arch.

“I had a really good experience with it,” Walters said. “I’m not much of a theatre person, so this helped me explore my creative side. It helped me bring the words to life, much like you do in a play.”

Walters was not the only WLHS students performing at Wordstock. Riley Knowles and Laurel Sleeper, juniors, performed as well.

“I performed ‘A Song in the Front Yard’ by Gwendolyn Brooks and ‘Blackberrying’ by Sylvia Plath,” Knowles said. “It was huge! I got involved with Poetry Out Loud sophomore year and loved it, which is why I went to Wordstock.” Sleeper performed in POL last year, placing second in the school.

“I recited ‘The Applicant’ by Sylvia Plath and ‘Her Kind’ by Anne Sexton,” Sleeper said. “It was kind of overwhelming because I got second in the school and was reciting with state finalists at Wordstock. “

Wordstock was not a competitive competition, but it did allow people to listen to and recite incredible poetry.

“Wordstock was incredible,” Sleeper said. “Go to it next time it comes. It’s so cool and students get in free.”

“Also, some advice for people who have to read poetry for English; You’ll enjoy it a lot more and notice new things if you look it up and listen to a recitation or better yet, speak the words instead of just reading it,” Sleeper said.