Life in the Pit 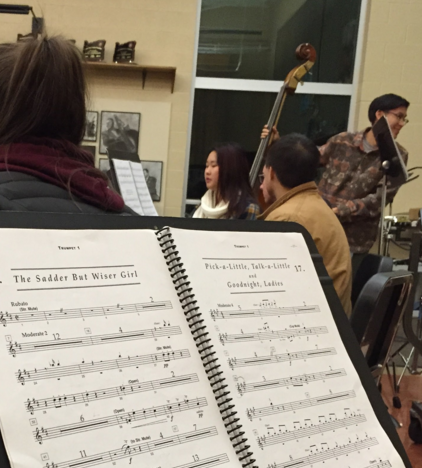 Bassist Eric Tran, 11, shares a laugh with percussionists during a rehearsal of the fall production of “Music Man”.

Heard but not seen the West Linn pit orchestra is a vital part of yearly WLHS musicals. Composed entirely of students, the WLHS pit orchestra has provided excellent soundtracks to popular productions such as Oklahoma or Little Shop of Horrors for years at the high school. This year will be no different with the preparations the WLHS production of The Music Man rapidly approaching. Junior Neil Yotsuya is this year’s principal trombone player.

“Last year I was in the pit and learned both trombone books to substitute for the two main players in the pit.” Junior Yotsuya said.

And by books Neil meant a novel sized collection of sheet music bound together. At least 50 pages per book played all in one night.

“It wears down on you as the night progresses but eventually you get used to it,” Yotsuya said “We would prepare weekly leading up to the musical for a few hours a night once a week.”

With nearly 70 members in this year’s pit orchestra counting substitute players it seems as if a large amount of young music students are willing to make a sacrifice like that. Conor Egan, this year’s principal trumpet player explained more.

“The appealing thing to me about the pit orchestra is how different the type of music we play as a group is. There is a large amount of adjusting on the fly and a large amount of writing that isn’t usually seen in concert band. Plus you’re underneath a stage with nearly no light for several hours.” Egan said.

Egan and Yotsuya both mentioned that WLHS is one of only a few schools with a good enough band program to run a pit orchestra without hiring professional musicians to play.

“We’re fortunate and unfortunate to be in a program this good, because we get the experience how it is in a real pit orchestra, but we also get to really experience life in a pit orchestra.” Yotsuya said.