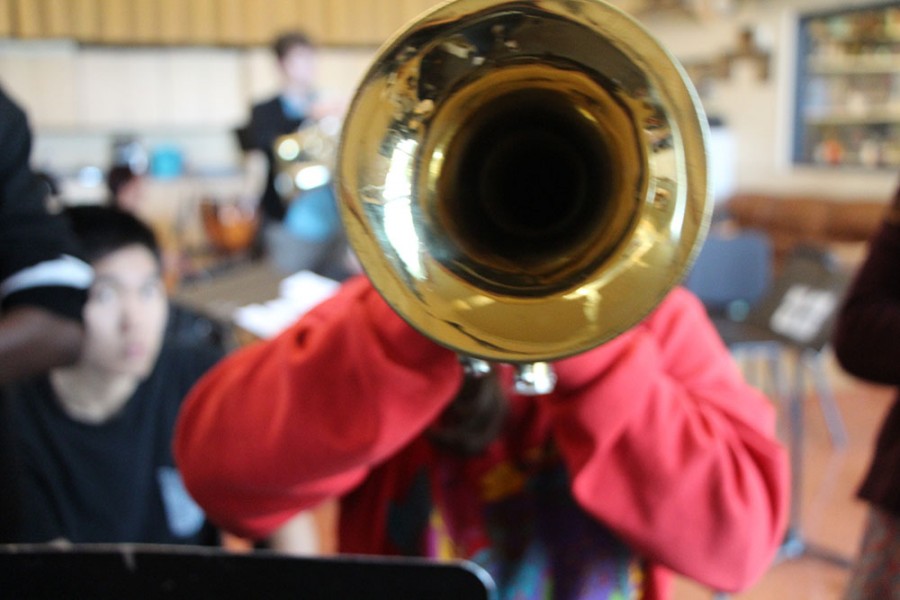 Picking up an instrument for the first time, Emma Harris, junior, learns the basics of playing the trumpet and reading music. Harris is a participant of unified band and will play with concert band two at their cadet band festival on April 21.

From blowing air through their horns to playing in a concert setting, months of hard work comes together as unified band students join concert band two on stage.

The idea to bring students who participate in activities such as unified soccer and unified basketball into the band classroom started after being inspired by United Sound, an organization involving students with special needs in music.

The goal of unified band at is to help students with special needs reach a playing level where they can be successful playing with concert band two.

“They’re here to be a part of us,” Kevin Egan, band director said.

Unified band started back in Oct., and the group had their weekly meetings after school on Thursdays. A group of concert band two students met with the unified band students to teach them not only how to play their instruments, but how to read music as well.

“I like being able to help teach others how to play an instrument,” Matt Landstrom, sophomore said. “They like to see themselves improving just as much as we enjoy it.”

The idea of unified band not only helps students with special needs, but it also proved to be a huge chance for growth in concert band two students. Egan’s goal is to teach them that it’s all about the music and anyone can be involved as long as they find a level that works for them.

Due to the success of the unified students, they will join concert band two on stage at their cadet band festival Thursday April 21. After the performance, Egan hopes to continue the unified band program for the remainder of this year as well as years to come.

“I’ll come back next year,” Landstrom said. “I enjoyed it a lot this year and it will give me a chance to see them grow.”