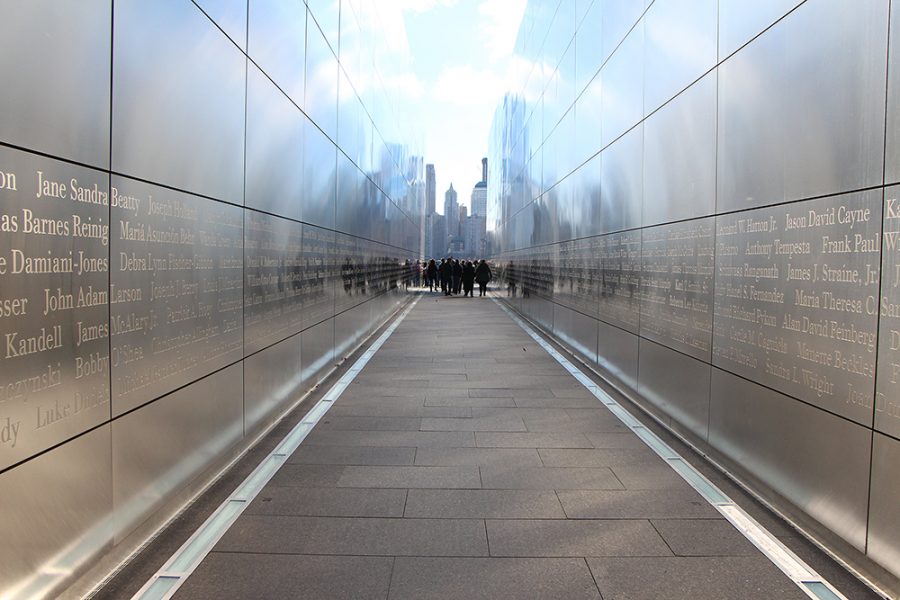 Singers from the choir program admire and walk through the windy passage of the Empty Sky Memorial to the 9/11 tragedy after their ferry to the Statue of Liberty is cancelled. The five day trip to N.Y. included many powerful and impactful experiences such as how the singers visited multiple memorials for 9/11, the Broadway shows they experienced, and visiting the awe-inspiring chapels and cathedrals scattered around the huge city.

It was 3 A.M. when the choir students and chaperones met in the Performing Arts Center, soon to be on their five hour flight across the country. Around 45 students embarked on the five day choral trip to New York City, which took place from Mar. 31 to Apr. 4.

Among the various activities they participated in, a select handful defined the trip, such as attending two Broadway shows—”The Color Purple” and a choice between “Aladdin,” “Les Misérables,” or “Chicago”—while in New York.
“The best part of the trip was ‘The Color Purple’ because the vocals were amazing,” Anna Speer, sophomore, said. “I’d never seen a play like it.”

Sydney Steinberg, freshman, was also deeply impacted by this production.

“Watching ‘The Color Purple’ was one of the most moving experiences of my life,” Steinberg said. “It was so inspiring to see this cast of people doing what they love so well, and I can only hope one day I will have worked hard enough to be on their level.”

Before watching their first Broadway show, the choir attended and participated in a Broadway workshop with members of the first cast of “Aladdin.”

“I had so much fun in our Broadway workshop,” Abbie Stout said, senior. “We got to learn a song and dance from ‘Aladdin’ with Andrew Cao, and he was extremely talented!”

One of the moments which stood out most in the minds of the students who participated in this choral tour took place at the 9/11 memorial, at the foot of the One World Trade Center.

Nathaniel Colman, junior, and Stout were two of the many students impacted by the experience.

“We sang the national anthem at the ground zero memorial,” Colman said. “The amount of emotion was staggering.”

“Singing on ground zero was such a powerful and emotional experience,” Stout said.

For much of the remaining time the choir spent in N.Y. they visited chapels and cathedrals in which they would perform.

Meghan Sapp, senior, found these experiences to be more interesting than she expected.

“My favorite part of the trip was seeing all the chapels and how pretty and amazing they were,” Sapp said.

One of the highlights for many of the singers was their performance on the Carnegie Hall stage. This event did not only impact the singers themselves, but also the chaperones who attended.

“The choir rocked the stage at Carnegie Hall in New York,” Tonia Gordon, chaperone, said. “The parents and audience both were blown away by the outstanding performance!”

Robert Czokajlo, senior, has thought much about what made the trip meaningful for all of the singers, and will miss it dearly.

“For many, this trip was a new idea, something unheard of,” said Czokajlo. “Yet in all cases, the 2016 choir trip to N.Y. strengthened friendships, created new ones, and generally sought to give everyone an enriching tour and choral experience.”