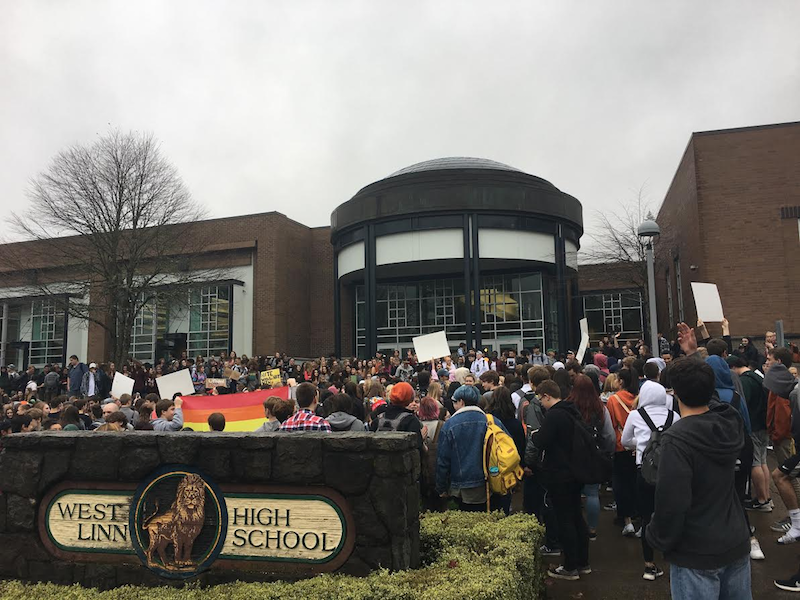 Students gather in front of West Linn to share a message of peace and tolerance. Photo by Philip Chan.

Hundreds of students walked out of class at 1:30 Monday afternoon, gathering in front of the school to protest threats, intimidation and bullying. Some students carried banners and signs with slogans like “WL strong,” “Progress has no color” and “United, not divided,” while some students carried pride flags. The walkout was marked by chants of “West Linn united, we cannot be divided.” With news crews watching on, students delivered their message.

According to a flyer created by student organizers, the walkout wasn’t “about Trump, Clinton [or] elections.” The intent of the walkout was to show solidarity with victims of discriminatory remarks. The organizers called on students to show “Solidarity for belief in these values through actions/pins” and also asked the school district to “Deploy diversity training, curriculums, and programs to assist students and community in making these values a reality.”

Speeches from students drew applause from the watching crowd. Speakers included victims of discrimination and bullying.

Afterwards, Principal Kevin Mills released a statement to parents via email announcing that  “Some students participate[d] in a peaceful demonstration with a message about treating one another with love and respect.”

For students who decided not to participate, teachers continued their classes, and protesting students returned following the conclusion of the event after 30 minutes. The protest was entirely organized by students, and while teachers and staff did not attempt to stop the students, they did not officially sponsor it.

WLHSnow will have continuing coverage of the walkout and its aftermath in the coming days.