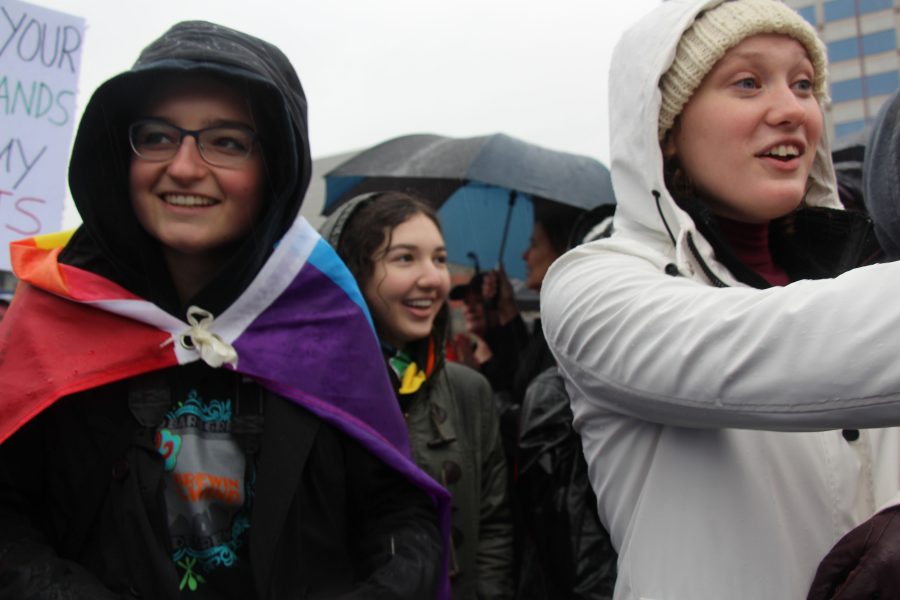 Wrapped in an LGBT pride flag, Maxi Muessig (left), senior and president of the GSA,marches throughout Portland for what she believes in, accompanied by Sydney Steinberg (middle), sophomore, and Deanna Plunkett (right), senior.

After taking his family to church, meeting with Obama and having a record-breaking  six religious authorities speak, President Donald Trump took the oath of office and gave his inauguration speech on Jan. 20. A common theme of the speech seemed to be how his presidency is going to bring greatness to all American people.

Trump’s campaign, however, showed he only wanted to bring greatness to straight white men with its sexism, homophobia and racism.

“Trump has honestly said some of the worst things in my opinion,” Eliza Victory, junior, who participated in the Women’s March on Portland on Jan. 21, said. “He’s publicly racist and xenophobic. Building a wall and banning Muslims isn’t going to do anything but push America into isolation. He’s openly sexist and ignorant. He’s called women pigs and made fun of disabled people. It’s completely unacceptable for a person in power to be against the people that make up this country.”

To protest all these elements that many are expecting to come from the Trump administration, over 100,000 people in Portland alone (and more than one million worldwide, with protesters on all seven continents) went to march.

“A lot of those opposed to the march said one of their reasons for opposing it was that it didn’t help, that instead we should communicate with our representatives,” Jay Oliver, senior, said. “My idea is that it does communicate with them. We’re showing them what all these people stand for, that over 100,000 people in Portland alone refuse to back down from that belief.”

Trump ended his inaugural address saying, ironically, “So to all Americans, in every city near and far, small and large, from mountain to mountain, and from ocean to ocean, hear these words: You will never be ignored again.” The Women’s March on Washington proved he was right.

“I don’t think he means anything he says,” Victory said. “I think that he only believes in one kind of American. He only believes that white, upper middle class are Americans. The march isn’t what his idea of uniting us meant, but I think that’s the funny part. He did make us unite, but it’s not on his side. We’re united against him, all the women and minorities that he doesn’t like. The march stands for unity against Trump, it’s standing up for all the women and people of color, and everyone who Trump is trying to oppress.”

We will unite, just not with him. We will not be ignored.