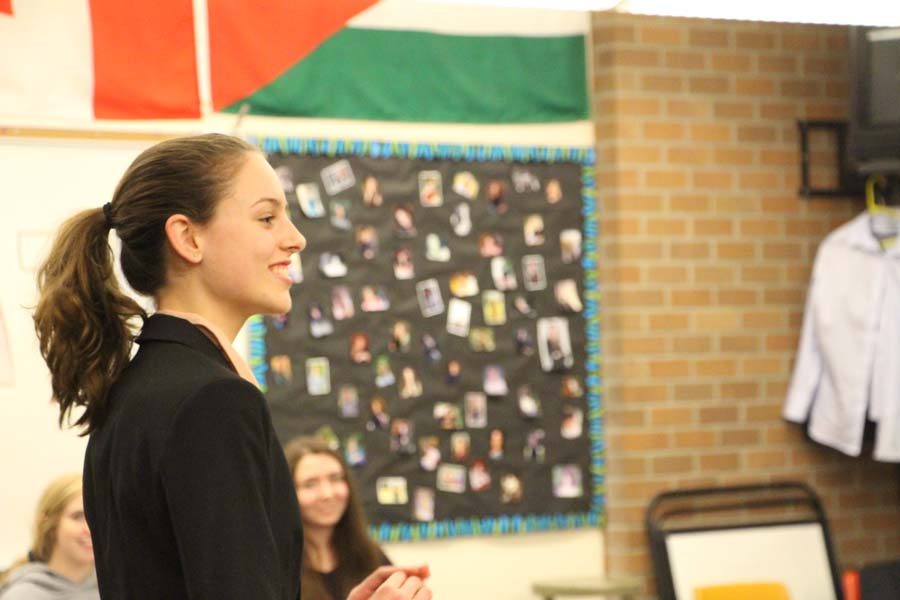 It’s not hard to see that West Linn’s duel mock trial teams are a dedicated group of sophomores, juniors and seniors. And after their success at districts, they’re more confident than ever for the state competition on Saturday.

West Linn’s mock trial teams consist of two groups: the Green team and Gold team. With coach Matt Kellogg, social studies teacher, advising both groups: the students are separated based on their previous experience in mock trial after finishing their first year of high school.

“The gold team is the more experienced one,” Maddie Sand, sophomore, said. “And the green team is the less experienced one.” The two groups were both eligible to advance to state after their separate wins against other high schools in the district.

“Some teams made it to state, including both of the West Linn teams, Lakeridge, and Lake Oswego,” Kierra Kramer, sophomore, said. But Kramer made it clear that not all teams were qualified to go. “Lake Oswego wasn’t qualified to move on, but they got to move on because there was an uneven number of teams for state, so they’re allowed to go.”

Before competing, the teams faced heavy preparation and diligent practice for the district competition in the months beforehand, since it would be one of the most important competitions of the year.

And as the important date came closer, the teams put in longer hours in order to revise their cases, along with looking over their personal performances and practicing for what their competitors may bring.

“We had to practice every day for two hours for two weeks,” Kramer said “from 6:30 to 8:30 right before the district competition.”

While their work clearly paid off due to their unique success, the teams unquestionably faced challenges the day of the competition.

“The most challenging part for me was mentally being prepared,” Thayer said. “because all of our material was there, but it’s a mental thing going in because you have to know what material is there and you have to believe that you’ll do well.”

Other members faced their own personal challenges and apprehension before their rounds, but carried on regardless.

“I thought my witness was going to run all over me,” Sand said  “but then they were very easy to control.”

While the competition may have been daunting for the teams, they believe they found success due to many aspects of their team.

“I think we’re most successful because we’re very controlled and we know what we’re doing in the courtroom,” Kramer said “we have a really good knowledge of all the rules and have good content and overall a really good performance.”

Thayne, who’s an experienced member of mock trial, agreed with the statement.

“I’ve seen us when we haven’t had good composure,” Thayer said. “and comparing this competition to others, we did a lot better.”

Along with composure, Sand believes that the need to maintain their skill sets amongst the other teams helped them in their results, since they made sure to retain their level of professionalism throughout the event.

“You have to keep competing at the same level you would always compete at,” Sand said “even if they’re an easy team or if you’re competing against the top team.”

And even though districts may have just ended, both teams have individual plans for how to prepare and improve their cases for the state competition. The Gold team is preparing to analyze the holes in their performance, and see what is needed to be improved.

“The senior team is going back through their case and making sure that everything we have is the strongest way to present it,” Thayer said. “We’re looking at what might have been confusing and what might not have been clear and twisting it a bit so there’s no questions about what we’re talking about.”

The Green team has similar goals, but agree it’s based on the unique nature of their case.

As the teams prepare tirelessly for state, they know success is not guaranteed for the highly competitive tournament, but say that the teams will prepare as best as they can.

“It’s very up in the air if we’re going to state,” Thayer said. “but we don’t know what we’re going to see from our competitors at state, but we’ll still be ready when it comes.”

Whether the teams make it to state or not, all students from both teams can agree the skill set they gained from the experience was worth the hours put into the team.

Some of these skills can be attributed by the coaches on the team. Along with their teacher advisor, the teams have also had other judges from across the district to help them prepare for their cases, and give them important feedback.

“We have a lot of really good coaches,” Kramer said. “Some work at the Clackamas county courthouse. We also have guest judges who come out to help us.”

The team stressed how they were unlike most volunteers, based on their ability to teach rather than telling them specific changes they need to make.

“They give their input on our work,” Kramer said. “but we’re ultimately the ones that make the changes.”

The coaches, who volunteer in their free time, are also appreciated by other members due to their hands off approach.

“They do a good job of guiding us while still letting us do our own work.” Thayer said.

The Mock trial teams will be competing at the federal courthouse in Portland on March 18, and believe that their tireless practice during the year will be something to be proud of, regardless of the outcome.

“Even though all the best teams are coming from all regions,” Kramer said “when we show up strong and look like we know what we’re doing, we do well.”