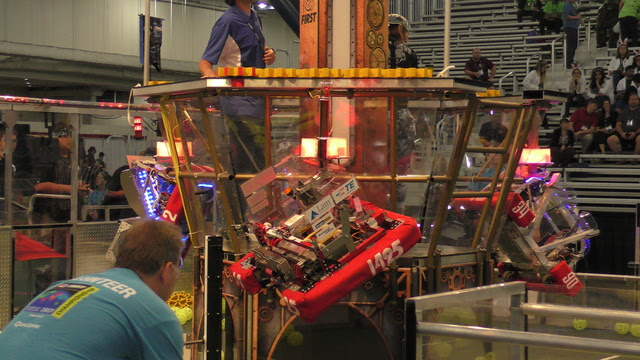 The robotics team qualified for worlds after competing in two district competitions and a district championship. “During a competition,” Benjamin Chan, junior, said. “Teams play twelve qualification matches, to raise their average ‘ranking score’, which is points cumulated from wins, losses, ties, and bonus points from special objectives. Between matches, a ‘pit crew’ works on fixing and maintaining the robot, checking for vital flaws, and running system checks to insure optimal performance. After regionals or district champs, the top teams qualify for the world’s competition, to which they must transfer their tools, robot, batteries, and other equipment.”

Building as fast as they can is how the robotics team starts off their season. After the limited amount of building time, the team then can’t touch their robot outside of strictly monitored time periods.

“The official robotics season starts on the first or second Saturday of each year.” Benjamin Chan, junior, said. “An international video is broadcast live to announce the ‘challenge’ of the year, a unique and different series of objectives that we must design and build a robot to solve. We then get six weeks to design, code, and fully build the 120 pound robot. Once build season ends, we put the robot in a sealed plastic bag, where we cannot touch it- except for strictly timed ‘un-bag windows’- until our competitions.”

To get the robot done in time, the team must be very organized. They delegate different roles to people so the team works as efficiently as possible.

“For robotics meetings the team is split up into 6 different sub teams.” Beth Hoots, senior, said. “Each one functions like a department of a business, so the software department works on the robot’s code, the mechanical department does design and fabrication, marketing plans business presentations, outreach, and fundraisers, electrical team wires the robot and makes sure we have power, scouting tracks what other teams are doing across the world, and strategy breaks down the game so we can maximize our scores with our robot.”

After multiple competitions, the team qualified to go to the world championships.

“Worlds is an incredible experience because of the huge robotics community.” Hoots said. “Teams from all over the world come together to compete across cultural and language barriers in a challenge that drives the technological advancements of the future. All of these teams are doing amazing things, and I’ve made great friends through robotics.”

Worlds took place on April 18-22 in Houston, Texas. While there are 47 members of the team, only about 23 students along with adult mentors and teachers attended the competition.

While the team has qualified for the world competition multiple times, they still work their hardest to be able to continue qualifying.

“Our team has had a growing influence over teams in the area,” Chan said. “and we’ve come to be known as the one of the ‘powerhouse’ teams in the Pacific Northwest District, as we’ve now made it to worlds every year since the 2015 season. Expectations were high this year, and I personally think that we met them. We not only won one of our district events, but we were also able to receive awards for entrepreneurship, industrial design, and gracious professionalism.”

“Competition at the world level can be incredibly difficult since all of the teams are already very successful.” Hoots said. “Our robotics team has never made it to the final competition field- named Einstein field in keeping with the tradition of naming the competition fields after impactful scientists- so it’s always exciting and a little nerve-wracking to think about whether this could be the year we make team history.”

However, the team ended up being successful at worlds.

“We got to quarter finals again,” Brehl said. “But we were in the hardest field. In worlds there are six fields to split up the teams because there are 400 to 500 teams there. They have these different fields so matches can happen at the same time.”