In the midst of AP exams, actors and stage crew prepare for one of the final productions of the year 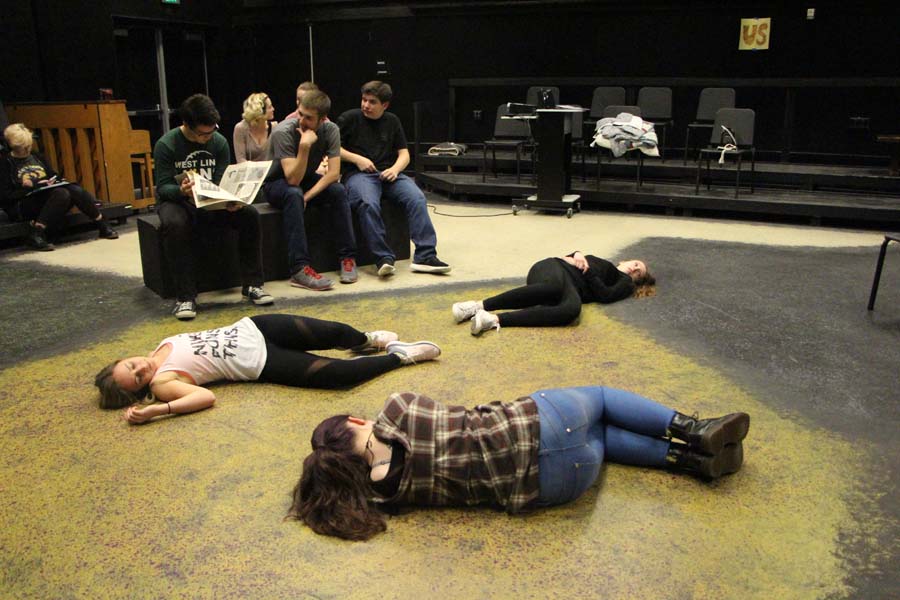 As Shorts rehearsals are finishing up, one group of actors prepare for “If Hamlet had been a Reading”, directed by Linda Snyder senior. Since cast lists were posted on April 7, students have been preparing every day after school with their groups. “The rehearsal process has been really fun,” Kierra Kohen, freshman, said. “In rehearsal we run the short and do character work. To rehearse at home, I read my lines and solidify the blocking.”

With one of the two final productions ending the school year, the newest student directed plays, “Shorts 18,” will hit center stage on May 4. With four diverse dramas, comedies, and everything in between, hopes are high for students acting and producing the plays for opening night.

“I auditioned because I really love theater,” Kierra Koehn, freshman, said. “I wanted to be in a production at the high school, and I hope to be in more.”

Kohen became involved in theater during middle school, and has been determined to follow her interest involving the Thespian Troupe since entering high school.

Koehn, who is in the short “The Man Who Turned into a Stick,” directed by Laurel Sleeper and Ellen Willmarth, seniors, plays what she describes as the ‘hippie girl.’

“My favorite part about my role is that she’s ditsy,” Koehn said. “It’s fun playing a character that is scatterbrained.”

While this may be Koehn’s first year in a high school production, other students are finishing up their final performances during their senior year.

“I wanted to do something fun for my last theater show,” Evan Kohne, senior, said. “Just a fun role that was quick and relatively easy to learn but also really fun to do.”

Kohne, who plays Bollander in “Lillie Meant Murder,” which is directed by Deanna Plunkett, senior, knew this would be a memorable role since this is his first time in a play rather than a musical, which he has had numerous roles in.

“This will be my only play for the department,” Kohne said. “It’s just musicals tend to have larger casts, and I’m more experienced in singing and dancing than acting, so it just gives me a better chance. And the roles in musicals tend to be better.”

When it comes to the transfer between the two, Kohne believes it won’t be that large of a change since having a role in a short instead of a full play.

“I mean these are pretty short so it’s not that bad,” Kohne said. “But if it was a real play it would be having to memorize a lot more lines and not nice long breaks in music.”

When it comes to Kohne’s specific role in the short, his rehearsals cause his to push himself physically and when interacting with other characters.

“We’ve been doing a lot of [physical] work. It’s a very dramatic show and my character is the straight man, so they’re the one that everyone is bouncing off and has to stay the most relatable,” Kohne said. “I’m really just trying to keep him in the back of my head and what would he do in this situation.”

While Kohne believes that the role is easy going, he did learn a specific talent for his character in the short.

“Bollinger tap dances,” Kohne said. “I have some basic moves, it’s just a matter of trying to work those in. Thankfully there’s not a lot of tap dancing.”

“At the end of one of my dances I have to get down on one knee and propose to one of the characters that tried to kill me,” Kohne said  “And the tap shoes are metal so I went down and slipped and I fell and the whole cast just started to crack up because it looked ridiculous. Overall, I have to make sure my character isn’t loud when he walks because every step is a loud crack.”

While many students involved act in the productions, some students were lucky enough to direct.

“I had to apply to direct and submit a resume to the theater department in order to get approval,” Michael Jonnson, senior, said. “This is my first time directing, but I’ve been in shorts ever since my freshman year.”

Jonnson, who is directing the short “Streuth” was able to shape this short on his personal vision and adapt it to the school, as well as using his personal skills to direct in a unique approach.

“To apply I had to submit a vision for my play and what I wanted to do with rehearsals as well as my ability to control the stage,” Jonnson said “I prepare by deciding what I want us to do the day before and picking specific moments to pick apart and work on.”

Jonnson’s personal directing skills will bring a personal flare and a unique approach to the short Jonnson believes this freedom and ability to direct actors has been one of his favorite parts.

“My favorite part has been getting to work with actors and help them see how fun acting and theater can be,” Jonnson said. “And how great of a program we have here.”

Other students are excited to begin getting involved after learning more about the theater department at the school.

“After watching so many impressive West Linn theater productions for so long, I wanted to get involved myself,” Jay Romero, sophomore, said. “Now this is my first production.”

Romero, who plays an unnamed actor in “If Hamlet had been a Reading,” which is directed by Linda Snyder, senior, has loved the experience that the short provides along with the specific themes of the play itself.

“Rehearsals have been really fun. So many cool people are involved in Shorts so it’s always a good time,” Romero said. “The Elizabethan era costumes are really cool as well.”

Romero also enjoys the specific role he plays and the additional comedic effect it adds to Snyder’s short.

“As one of five unnamed characters in the short, my character sleeps through almost all of the conversation and acts as a visual gag throughout the short,” Romero said. “I actually auditioned and was called back for a part different from what I was cast as.”

For those that are able to attend, Shorts will inevitably be filled with student talent in acting, directing and stage management.