Strong east winds in the Gorge combined with lack of air circulation have resulted in a layer of ash from the Eagle Creek Fire setting in. 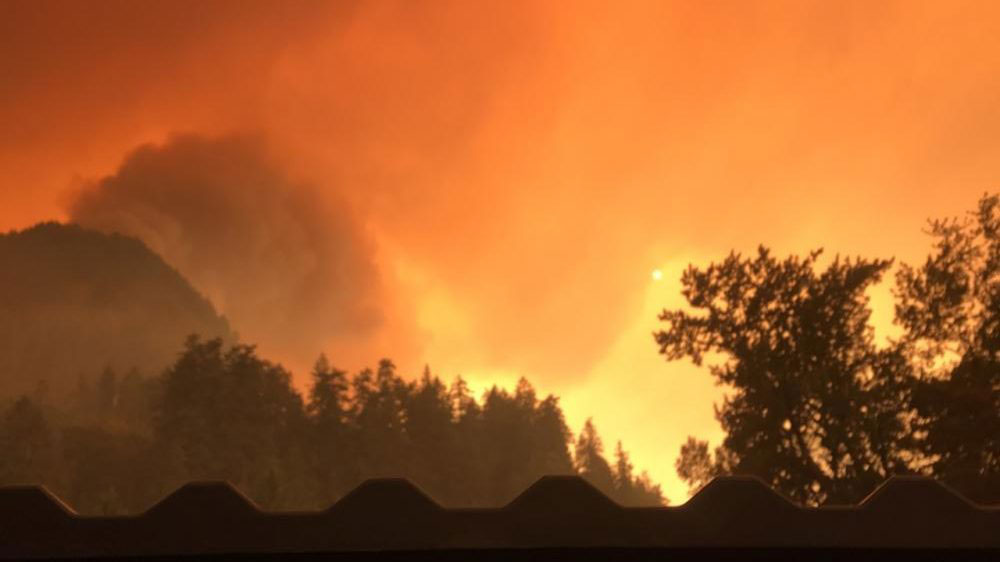 Fire blazes across the Columbia River Gorge. Smoke from the fires is a hazard to health of people living in the surrounding area, causing sports and other outdoor activities to be postponed.

As the Eagle Creek Fire quickly advanced 12 miles through the Ore. side of the Columbia River Gorge and threatened the famed Multnomah Falls Lodge overnight, the massive plume of smoke created by the blaze travelled aloft into the Willamette Valley, blanketing the surrounding area.

Air quality quickly became a concern for many, especially school officials. Some school districts are keeping students inside during breaks and recess. Portland Public Schools are releasing students two hours early due to lack of air conditioning and the air quality. Others, like the West Linn-Wilsonville School District, are monitoring the Air Quality Index (AQI) to decide the fate of athletic events slated to take place Tuesday evening.

“We are monitoring [the air quality] closely,” Mark Horak, West Linn athletic director, said. “The OSAA is also monitoring it. I’ve been in contact with our athletic trainer Becca Feuerherd. If she says to not play, we won’t play tonight. Mr. Mills and I are going to be meeting this afternoon to figure out what we’re going to do.”

According to AIRNow, the Environmental Protection Agency’s website for tracking air quality throughout the country, the Portland Metro area’s AQI was “unhealthy” at 163. Any value between 151-200 is unhealthy, meaning that everyone should “reduce prolonged or heavy exertion and take more breaks during all outdoor activities.”

East winds have peaked but are expected to continue to push smoke over the area and push the fire further west.

Many citizens have also noticed what appeared to be snow flurries falling from the sky throughout the past 24 hours. According to the National Weather Service, that debris is wildfire ash which will continue to fall throughout the day Tuesday, bringing back memories from the Mount Saint Helens eruption of 1980. That was the last time that ash trickled down onto the area.

In terms of relief, the AQI is projected to get worse throughout the day before it gets any better as marine air  and onshore flow pushes upward from southern Ore. Portlanders should be grateful, however, that they do not live in Eugene. The air quality there is “hazardous,” with an AQI of 411. As of 11am Tuesday, Eugene had the 3rd-worst AQI in the United States, trailing only Potlatch, ID and Juliaetta, ID.

Check back at wlhsnow.com for updates pertaining to the athletic events tonight.