Striding out of cancer in purple 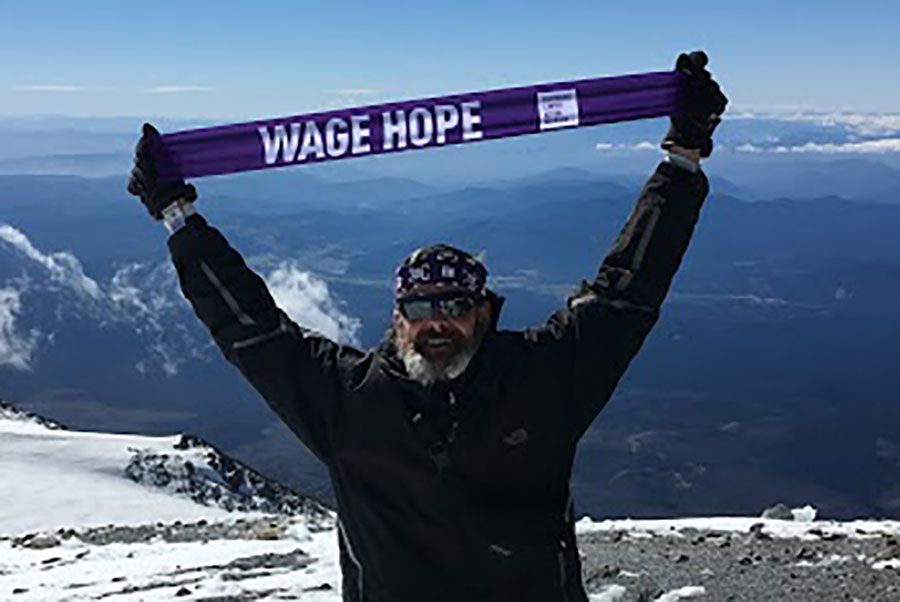 Joe Heiden at the top of Mount Adams holding a wage hope banner. Heiden brings a wage hope banner with him everytime he does something noteworthy or mentionable. He appeared on several talk shows in Portland after his appearance on American Ninja Warrior, and at these interviews he held up the wage hope banner to bring awareness to pancreatic cancer.

My dad is a Ninja Warrior. He completed two obstacles… without a fully functioning pancreas. That’s why this saturday’s fundraiser hits home for me.

On Sept. 23, Portland will ignite with the color purple. Purple is the color of hope for countless pancreatic cancer patients and (the few) survivors. The Pancreatic Cancer Action Network throws a huge fundraiser, called PurpleStride, each year to support all those affected by the disease. Friends, family members, doctors, and pancreatic cancer patients run or walk a 5k together. The event is located at the World Trade Center in downtown Portland.The opening ceremony, which starts at 9 a.m. kicks off the event with activities like a photobooth, and a guest speaker. Then, the run begins at 9:30 a.m.

In October 2014, Joseph Heiden, my dad, was diagnosed with stage three pancreatic cancer. The doctors told him that he may only have a few months to live. I couldn’t believe what I was hearing, it didn’t seem real. My dad immediately started treatment at the Oregon Health and Science University (OHSU). He had to endure the tortures of immunotherapy, chemotherapy and radiation. Although these treatments were shrinking the cancer, they made him extremely sick. Thankfully, they did their job and my dad was able to have surgery at the end of my freshman year. The surgery, though long and nerve racking, was successful. It was a miracle, to think that he had beat the cancer when he was told he only had a few months to live.

To bring attention to pancreatic cancer, and stay healthy my dad decided to train for the TV show, “American Ninja Warrior.” Since most of his pancreas was taken out in the surgery, my dad isn’t able to gain weight from fat. He has to work out everyday to stay alive. Having a goal helped him do this. During my sophomore and junior year, my family gathered pictures, interviews and other video content to help him create a submission video for the show.

Things seemed to be turning up; he even summited Mt. Adams. Then, the day after he returned from climbing the mountain, a scan revealed that his cancer had returned in his lungs. Luckily, he was able to undergo another surgery in October 2016. The doctors at OHSU got the largest tumor out, but a dent was created in my dad’s progress towards ANW. In order to pursue his goal, he would have to train a lot harder. My dad decided to take this hit and learned something from it.

“For others afflicted with the disease, it is very important to do your best to look at all of your options early on.” He said.“Since the disease is difficult to detect, it is often caught late and people rush to treatment, which can make them ineligible for clinical trials with new medicines.  People always ask how I stay so optimistic and happy.  For me, it doesn’t make sense to waste this moment, right now, worrying about an uncertain future.”

My dad was accepted onto American Ninja Warrior. In March 2017, my family packed our bags and headed to Los Angeles, Calif., where the first course was set up. We also had a film crew visit our house and follow us around for a day.The experience was incredible: I saw my dad battle pancreatic cancer so strongly and achieve things unimaginable to most patients.

Thinking back to the experience, my dad says, “Being on ANW was a lot of fun and an honor.  I am training as much as possible for next year and have more confidence than ever that I will make it to the buzzer!”

Although there is still cancer in his lungs, he is fighting, and will continue to keep fighting. Hopefully he will return on ANW next year.

Fundraisers like PurpleStride help save lives. Without their help my dad may not have had the resources he did. Supporting the Pancreatic Cancer Action Network helps fund new technology that may one day cure pancreatic cancer. For more information on how you can help wage hope and to sign up for the event go to http://www.support.pancan.org