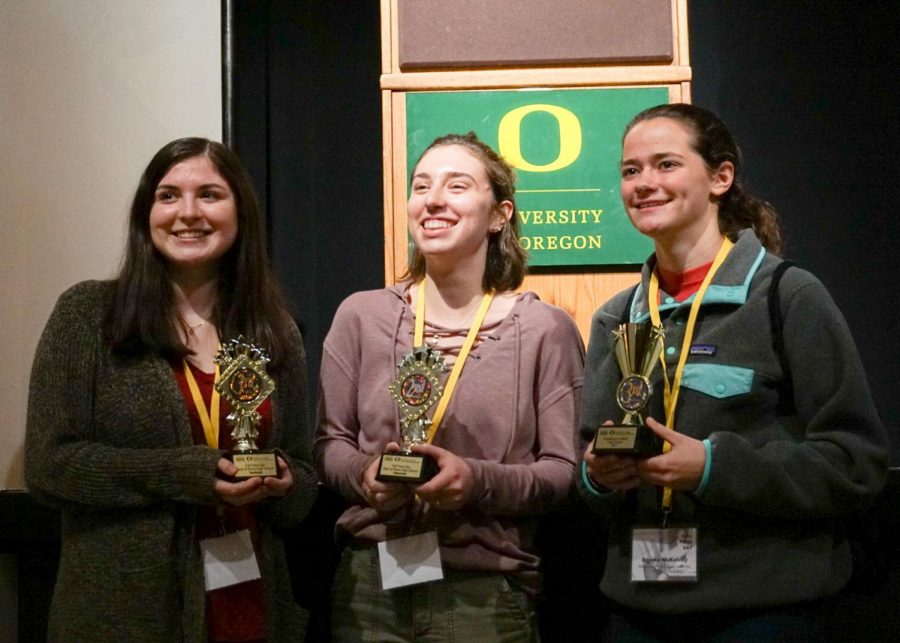 About 20 arrived outside the Performing Arts Center at 6 a.m. to take the bus down to University of Oregon. The Eugene college’s School of Journalism and Communication and the Northwest Scholastic Press hosted their 32nd Fall Press Day.

Prior to the event, the student media programs submitted their website, “WLHSnow”; the newspaper, “The Amplifier”; the broadcast, “The Breakdown”; and the yearbook, “Green and Gold” for awards.

Toward the end of the day, the award-winners were announced by Anthony Whitten, executive director of NWSP.

“Green and Gold” received second place in the yearbook category, and “The Breakdown” earned third place in newscast.

Whitten also gave trophies for “Excellence in Media.” The award was given to the school with the most points based on the other trophies they received and recognition awarded by the NWSP Media Olympics in June. West Linn received third place.

”We’re in the top three,” Andrew Callaghan, senior, said. “Not many schools can say that.”

Throughout the day, students and educators from across the state attended workshops on writing, photography, design and other media topics.

“My favorite part of Press Day was, and always is,” Emily Martin, senior, said, “Hearing from people who’ve been in the industry longer than I have.”

Keynote speakers began and ended the event. Journalist Jose Antonio Vargas shared his experiences as an undocumented immigrant and what it means to be American. Writer, producer and photographer Meghan Reese described her experiences working in print media, for television and as a freelance photographer.

At 3 p.m., the activities ended and students left the campus.

“I’m really, really proud of the staff,” Martin said. “We keep getting better and better.”