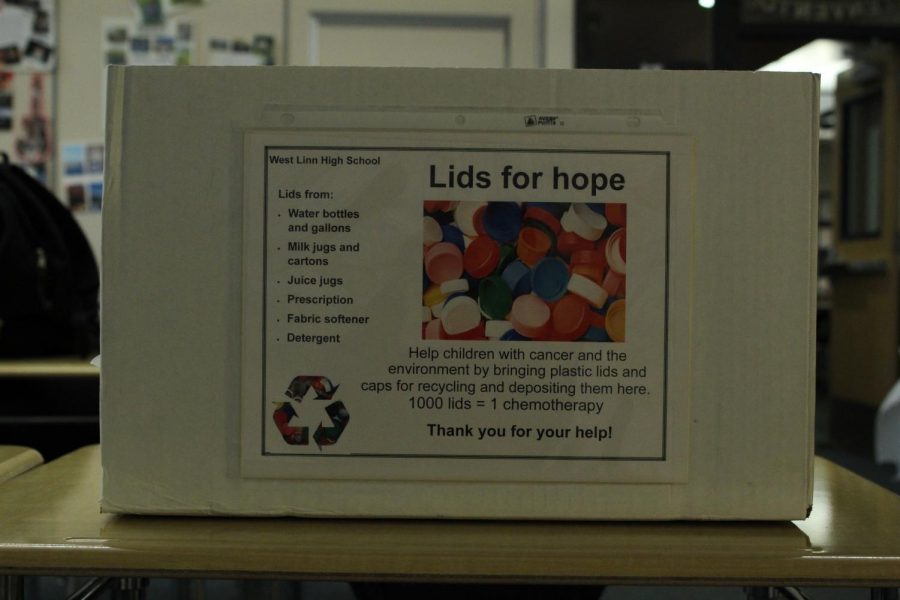 Boxes like this were located in all of the Spanish class rooms, to keep score for the competition, Russell counted them herself two to three times a week.

Mysterious boxes appeared in Spanish classes and soon began to fill with colorful lids. To a stranger, collecting these lids may have seemed pointless. Little did they know these lids were lifesavers.

Heroes come in all shapes and sizes, and for many children in Latin America battling cancer, plastic lids bear that title. Asociación Mexicana de Ayuda a Niños con Cáncer is a volunteer organization that helps children with cancer.

AMANC collects bottle caps and other plastic lids, which are then recycled, and the money that comes from recycling goes to a family of a child cancer patient. The money helps them pay for their child’s medications and medical bills. AMANC is especially important because it not only saves the lives of many children, but it also benefits the environment.

“Residential and commercial service garbage and recycling collection companies do not take plastic lids,” Carissa Russell, junior, said. “They are too small or too flat to be sorted out of recyclables and usually end up at paper mills where they contaminate the paper. Those lids then are garbage.”

Russell  has been helping this organization for two years. She first learned about it through her aunt who lives in Mexico. This year, she decided to bring her project to school. She titled her fundraiser “Lids for Hope” and created a competition for the Spanish classes to see who could get the most lids.

Each Spanish teacher was trying to collect 1,000 lids throughout their classes. If each teacher collected 1,000, a total of 5,000 lids would be collected throughout all of the Spanish classes.

“If we reached our goal as a department, which we did, all Spanish classes would have a Día de Fiesta before Winter Break to celebrate,” Lisa Rodriguez, Spanish teacher said. “This will include potluck-ed food and a movie, in Spanish of course.”

If their goal was not met, the class with the highest amount of lids would only receive a fiesta. Mrs. Rodriguez’s classes took the lead with 10,398 lids. Mr. Zollinger’s classes took second place with 3,539. The remaining classes (Mr. Lewis, Ms. Eseppi, and Mr. Millán) collectively gathered 3,087 lids. Russell had been counting the lids herself two to three times a week, and the scores were recorded on Spanish class whiteboards.

The competition began on Oct. 9, and finished earlier than planned on Nov. 17. It was originally going to end on Dec. 1, but Russell needed more time to clean, and prepare the lids to be donated, and the Spanish classes reached their goal quicker than expected. Russell will take the lids to La Paz, Baja California Sur on the 15th and from there, they will be mailed to the capital of Mexico.

“I’m happy that there’s this opportunity for them [children with cancer] with this organization to help them get the treatment that they need” Russell said.

While the competition surpassed expectations–Russell’s original goal of collecting 5,000 lids was met and doubled–Rodriguez noted the success went beyond the numbers.

“I am really proud of how our students pulled together to raise so many lids that had two main benefits: helping the environment and helping others,” Rodriguez said, “It is a solid reminder of how there is truly power in numbers, and if everyone does a little bit, we can do a lot together to better our community and the world around us.”