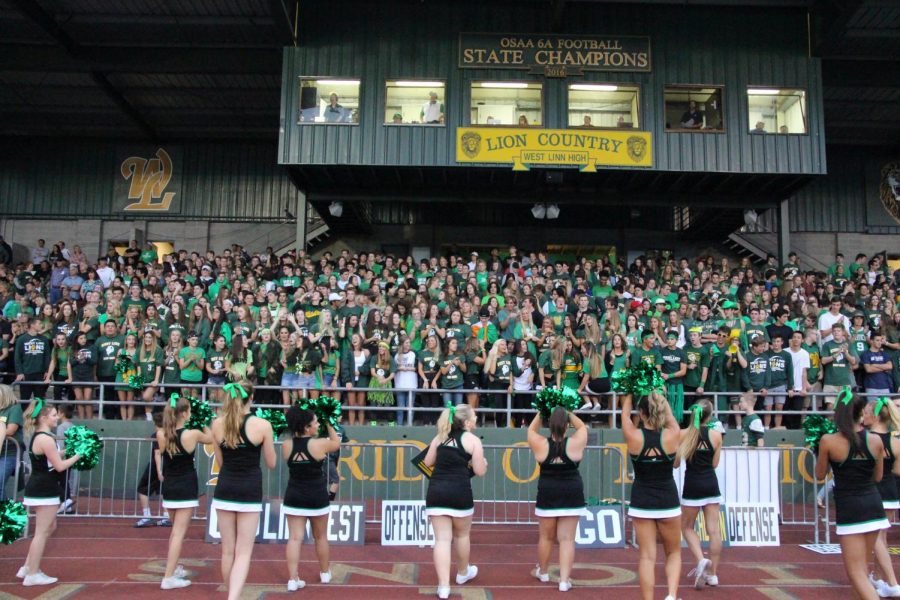 Leading the student section in cheers as the football team plays against South Medford, the cheerleaders are able to show off their game routines. This past weekend, however, the team made their transition to their competitive season with a second place finish at their league competition.

An integral part of every football and basketball season, the cheer team fails to go unnoticed when leading the student section in cheers and building excited energy. This past weekend, cheer transitioned from cheering at such school sporting events to their competitive season as they took home second place at their regional competition.

“It was pretty stressful for sure,” Annaliese Martinsen, senior and team captain, said. “I’m super happy with how we finished, considering how it went.”

During a routine stunt, two flyers fell out of the air, surprising everyone. Not letting this hold them back, however, the rest of the team kept on going and finished the routine.

“The hardest thing is that cheerleading is definitely a team sport, so if anyone is sick or injured, we have to change our routines to accommodate for that,” Martinsen said.

This past weekend was a prime example of the struggles the team can face, and how there is always room to improve, but finishing second isn’t a bad place to start. The team will have more competitions to come, but their main focus will soon be on the state championships which will be held Feb. 10.

The state championship is a moment envied by all sports teams, but for many of the cheerleaders, they act as the face of football games, second only to the football team. Young kids often look up to them as idol figures, something that is really important to the team.

“I love being a role model to our youth cheer program,” Martinsen said. “When I was in elementary school I looked up to all the cheerleaders at the high school, so it is really cool to be able to finally be that person.”

Along with being a community role model, the cheer team puts in a lot of work that people don’t often get to see. Sporting event cheering is focused on rallying the crowd and cheering on the team playing, but competitive cheer is where the team really feels they can excel.

“We really get to showcase our abilities such as stunting and tumbling, which I feel as though students and parents don’t see,” Martinsen said.

From here on out, the team is focused on smoothing out their rough edges as they readily await February. Their preparedness is already leaps and bounds ahead of their competition, however, so now it is time to solidify their future position.