The state of the presidency 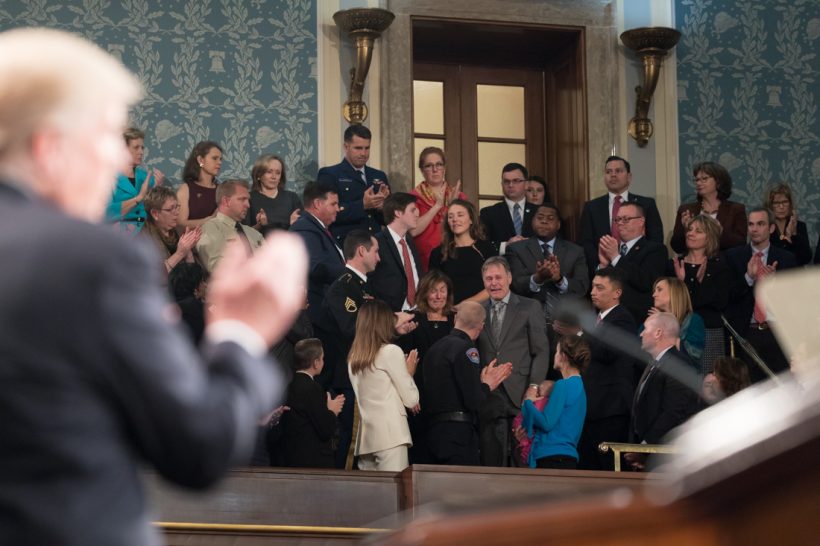 On Jan. 30th, President Donald Trump presented his first official State of the Union address. After a year of chaos and controversy, the president’s speech, written by Stephen Miller, struck a strong, nationalist tone. At times aggressively partisan, the speech flitted between radically conservative policy proposals and a rundown of the president’s accomplishments. Here are the key points of the address.

Trump’s guests were the highpoint of the address

This State of the Union speech relied heavily on pitching to figures other than the president. It makes sense. When you have a figure as deeply unpopular as the current president, you want to draw attention to others when possible.

The biggest applause of the night came for Steve Scalise. The Louisiana Representative was shot by left-wing radical James Hodgkinson in June of 2017. It was a moment of genuine sentimentality that seemed almost out of place in a night dominated by partisan rancor.

Alongside Scalise, the speech included presidential shout outs for victims of gang violence, a police officer who adopted a child from a drug addict, the parents of Otto Warmbier and 12 year old Preston Sharp, who placed flags at thousands of veteran’s graves.

However, the undoubted highlight was Ji Seong-ho, the North Korean refugee who has become a human rights activist. Seong-ho’s story is a touching one, and the image of him raising his crutches skyward was the lasting memory of the speech.

While these moments were emotional, powerful ones that bridged the partisan gap, they belied a deeper insecurity. This speech did not feature guests, it relied on them. This is not the tactic of a politician with faith in himself, or of speechwriters with faith in their president. It is, however, an effective route for an unpopular president looking to gain bipartisan support.

“The state of our union is strong, because our people are strong.” It was an aggressive line for an aggressive speech. Throughout, Donald Trump emphasised patriotism, militarism and respect for America.

Key points included a long section on standing for the national anthem, a cultural conflict that Trump’s supporters are heavily invested in, multiple references to Christianity, and most importantly, lines about veterans. Trump has run his presidency closer to the military than any in recent memory, and his militaristic, nationalist appeals were in keeping with his presidential actions.

But beyond merely strong language, the president unveiled a number of aggressive new policy proposals. From ramping up our nuclear arsenal to keeping the Guantanamo Bay detention facility open to praising our military’s advances against ISIS, Trump fell back on the traditional aggressively  interventionist  Republican foreign policy dialogue.

Most striking was Trump’s openly antagonistic language toward North Korea. Trump’s references to the tragic death of Otto Warmbier, the 22 year old who was captured and tortured on a trip to North Korea, were pointed and aggressive. The standing ovation for Ji Seong-ho was a magnificent moment, but the message was clear. This administration is devoted, more than any other, to the overthrow of the Kim dynasty.

President Trump presented two comprehensive policy plans for the upcoming year. The first was a massive infrastructure plan. Trump called on Congress to approve a 1.5 trillion dollar bill. Infrastructure was a key talking point during Trump’s campaign, but it fell by the wayside during the chaos of his first year. A massive infrastructure bill might not be popular amongst the deficit hawks of the Republican Party, but it would be a major, tangible achievement.

Trump also laid out an immigration platform that looks set for failure. His plan offers an improved DACA deal, but demands funding for the border wall. In addition, Trump called for an end to the “catch and release” policy, as well as the lottery system, which he mischaracterized as being fully based on luck. Finally, and perhaps most dramatically, Trump demanded an end to “chain migration,” which he falsely claims will allow immigrants to bring in an “unlimited number” of relatives.

The reality is that this bill is unlikely to be popular enough to pass. Figures on the radical right are unwilling to pass a DACA deal, and Democrats will never allow an end to family based migration.

The State of the Union is not merely a demonstration for the president. The opposing party has made a tradition of responding with a shorter speech after the president, and this year it took on a special significance. 2017 saw a groundswell of anti-Trump action, and Democrats attempted to tap into it in two very different ways.

The official Democrat response came from Joe Kennedy III, the grandson of Robert Kennedy. The 37-year-old Massachusetts representative is a rising star in American politics, and his speech struck a relatively new tone for the Democratic Party. 2016’s line of “America is already great” proved disastrously unpopular. Trump’s election was fueled by rage and fear, and in a way, Kennedy tapped into that. Though he kept a positive tone throughout, Kennedy confronted the fears of many Americans. His lines on economic inequality and his attempts to tie the plight of immigrants and Americans worked as a unifying message.

It was an optimistic speech, highlighting the contrast between Trump’s divisive politics and his message. Kennedy’s strongest point was a line that echoed the rhetoric of his famous relatives: “The strongest, richest, greatest nation in the world shouldn’t leave anyone behind.”

Kennedy set about presenting a moral vision of the world, a sort of touchstone for the next year of Democratic politics. It was dramatically different from the second speech, a Twitter livestream from Bernie Sanders.

Senator Sanders gave a speech that is perhaps best described as a sales pitch for socialism. It was fact heavy, and surprisingly the least emotional of the three speeches. From the Senate’s most radical leftist partisan, a fiery rebuke of Trump was expected. Instead, while Sanders certainly pulled no punches, he focused on statistics and facts. It was a message aimed at a wider audience, Sanders laid out a rebuke to Trump and his economic policies.

Only time will tell the impact of these speeches, but in their broader role as battle plans for the 2018 midterms, Trump, Kennedy and Sanders presented vastly different political and world views. In spite of all the calls for bipartisanship, one thing is clear: this is a divided America.