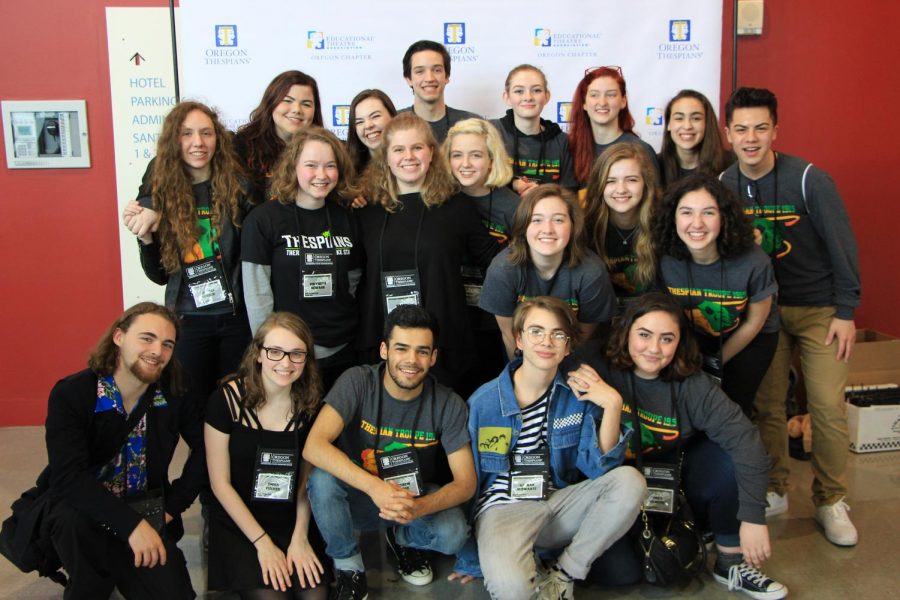 At the Thespian State Festival, Thespian Troupe 1915 was well represented in a variety of categories. By the end of the weekend, seven awards were handed out to the Troupe along with many lasting memories.

In their most recent appearance, Thespian Troupe 1915 gave it their all at the State Festival in Salem, Ore. April 5-7 coming out on top in many categories.

This success was the product of over two months of planning and rehearsals, many Thespians working diligently throughout the weeks leading up to the State Festival to perfect each moment of their performances.

“[Matthew Lewis] and I met with Annie Kaiser several times a week to get her professional opinions and tips,” Brady McDevitt, senior, said. “She helped us get our piece to award-winning level.”

McDevitt and Lewis performed a musical duo called “Popcorn” from the musical “Little by Little” and showcased, which means that they had the top performance in their category.

“It was a breathtaking experience,” Lewis said. This was Lewis’ second appearance at the State Festival, but his first with McDevitt and they definitely delivered in their final high school competition.

Thespian Troupe 1915 doesn’t participate in the national competition, although if they did, Lewis and McDevitt would only be one group of many to advance (see results below). This in mind, the competition wasn’t the main memory made at the festival.

“The thing that stuck out the most to me was the community,” McDevitt said. “Thespians aren’t afraid to speak their minds. I felt really loved.”

McDevitt and Lewis are both officers of the troupe along with Nick Olson, senior, who was also a member of the State Festival group and went on to be selected for the All-State show. With these three talented and diverse leaders graduating, they still feel as though their troupe will be in good hands next year, especially with the depth shown at the festival both on and off the stage.

“If I have learned anything from being a Thespian it’s that being kind to everyone will get you so far,” McDevitt said. “From the time I was a freshman to now, the Thespians have grown so much in that way.”

With the State Festival under their belts, the next item on the Thespians’ plates is Shorts 19 which will make its debut Thurs. May 10 in the Performing Arts Center.

Theater etiquette video selected to play at the State Festival

Tech Olympic Team, What Would Jon Ares Do?, won the Tech Challenge