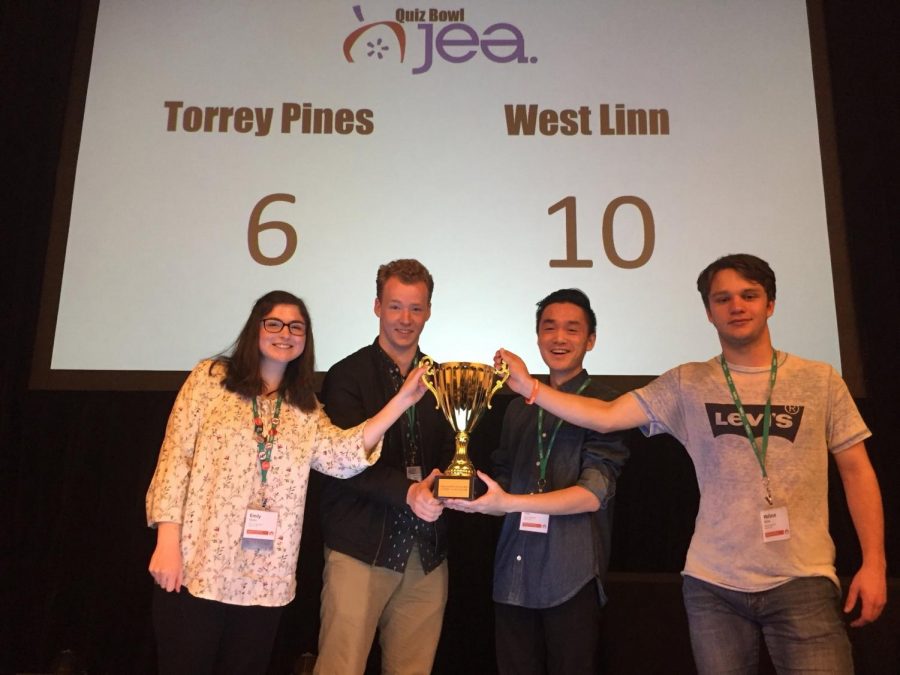 Celebrating their win, the Quiz Bowl team bounces back in the final round against their opponent Torrey Pines High School, the team that beat them in the national competition last year.

In a crowded room full of their competitors, the Quiz Bowl team faced off in their fourth round for the title of National Journalism Convention Quiz Bowl Champion.

“It was quite nerve wracking,” Philip Chan, junior and team member, said, “Because we really wanted to win.”

The competition consisted of 24 teams, only 16 of which made it past the preliminary written test to qualify for the March Madness style bracket. Securing their lead early, the Quiz Bowl team came away from the written test seeded number one.

“We felt like we were either going to place really low or not at all because it seemed like we were guessing or just assuming answers,” Andrew Callaghan, senior and team member, said.

Along with Callaghan and Chan, Emily Martin, senior, and Wally Milner, junior, were members of the team as well. Once the team made it to the second round, however, the team was down to three members as Martin, who was recently announced as Oregon Journalist of the Year, had to go and meet up with other Journalists of the Year from around the nation.

The team was left at a disadvantage since only those who participated in the written test are able to compete, but that didn’t stop them. Not only were they answering questions accurately, but they were beating their opponents, and sometimes even the moderator, to their buzzers.

“There was one question where everyone was quiet and just looked at each other,” Milner said, “But as soon as I heard it I was like, ‘Wait, I’ve got this.’”

Before the moderator even finished the question asking who the only U.S. president is to have written a play used in the Super Bowl, Milner buzzed in with his answer of Richard Nixon. This seemingly random fact had been in the back of Milner’s mind since third grade, when he bought a book full of U.S. presidential facts.

“For whatever reason, that was the fact I remembered,” Milner said.

It was moments like these which gave the Quiz Bowl team the edge over their competition and allowed them to redeem themselves from last year’s competition.

“The final match was against Torrey Pines High School,” Chan said, “Which was the team that we lost to last year and wound up taking first.”

This year was a different story, as the team went on to beat Torrey Pines with a score of 10-6.

“Every match was pretty close,” Milner said, “But the best moment was when we actually won.”