May Day takes to the skies 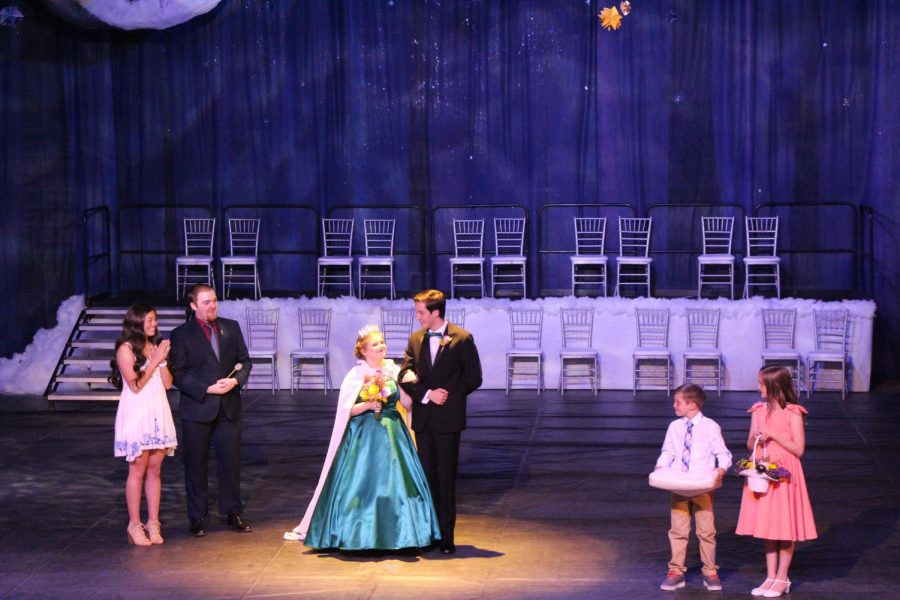 Moments after being crowned queen and king, seniors Brady McDevitt and Matthew Lewis take a moment to appreciate their longtime friendship before continuing with May Day festivities.

For 20 seniors, April 27 was the time to shine. After nearly six weeks of preparation, the 98th May Day was upon them as they danced in the moonlight for friends, family and faculty in the annual spring tradition.

The night went without any hiccups, a testament to all the time and effort put in by court members, performers and ASB officers.

“We had practice from six to nine every Sunday night,” Princess Shay Hicks, senior, said.

These rehearsals consisted of hours of dancing which left court members tired and sore, but they also brought court members closer and created memories that will last a lifetime.

“My most memorable moment was finishing the fast dance for the last time and not being able to stop smiling for what felt like three hours,” Princess Megan Talbert, senior, said.

The night went on for a little more than two hours, consisting of the court introduction, student talent performances, the freshmen Maypole and the final dance put on by the court. This year the court was made up of 10 couples (see below) and kicked off the night with the crowning of seniors Matthew Lewis and Brady McDevitt as king and queen respectively.

The court started and ended the evening in the spotlight, but the time in between was filled with student features ranging from state-winning Thespian performances to musicians who only sing on the side. For these performers who don’t always have the opportunity to show their talent, May Day gave them that option.

“I thought they were fantastic,” Nick Olson, senior, said. “It was great to see those who aren’t directly involved in our performing arts programs be able to step up and showcase their talents.”

Olson is a member of Fresh Pitch, the school’s acapella group, and took part in serenading Queen McDevitt after the coronation. This is a long-standing tradition along with the various dances performed by the court throughout the night.

“I had the toughest time learning the waltz,” Hicks said. “I mean remembering the choreography overall was pretty tough, but slow dancing with my partner Cody Fretwell during the final performance went well and everyone did such a great job.”

Although the pressure of May Day is off of their shoulders, the court still has to retain the choreography as they will be performing at prom on May 19. They are done with rehearsals, however, May Day is still lingering in their minds.

“This has definitely been the most memorable high school experience,” Hicks said. “I’m for sure going to tell my college friends and eventually my future family about it.”

Kylie Fretwell and Will Glausi