Is Trump inspiring a new wave of abortion laws? 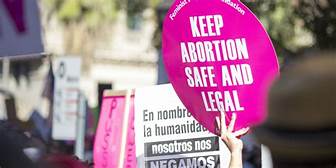 Lauren Terry, WLHSnow Staff
Iowa governor Kim Reynolds signed a bill that would effectively ban abortions at 6 week of pregnancy, known as the “fetal heartbeat” bill proposed Friday, May 2nd. In consequence, this law would require women seeking abortion to undergo an ultrasound, with exceptions including victims of rape and incest. However, a woman would have to report a rape within 45 days to law enforcement or a physician, and incest would need to be reported within 140 days. If a heartbeat is detected, a physician can not perform an abortion. This would make Iowa the home to the nation’s strictest abortion restrictions, and appears to be an attack on women’s rights.

However, many fear that this will only stop the safe abortions, and that lawmakers are absurd to think that abortions will stop if the bill follows through. Pro-choice activists, such as president and CEO of Planned Parenthood of the Heartland, Suzanna de Baca, are fighting to prevent this law from taking action alongside the ALCU; “We will challenge this law with absolutely everything we have on behalf of our patients.” Planned Parenthood voters of Iowa said, “By passing an intentionally unconstitutional bill, Iowa Republicans have declared that they do not care about the foundational values of our state, or Iowa’s future.” It was obvious from the start that this law would be challenged in court, and there is a small chance it will follow through. However, the many issue for pro-choice activists is the many abortion laws that are coming into place, even outside of Iowa.

Critics argue that the bill would ban abortions before some women even know they’re pregnant. Many believe that this is clearly unconstitutional, and could have seriously adverse repercussions for Iowa women. “It’s ridiculous that our government can govern women’s bodies,” said Jessi Allard, a 35-year-old youth counselor.

The bill is scheduled to go into effect July 1, which will “likely not see the light of day,” meaning it is unlikely it will pass federal judges. Additionally, both planned parenthood and the ALCU announced their agenda to sue the state of Iowa, challenging the 6-week abortion law.

Trump’s administration may be inspiring a new wave of abortion laws around the country. Legislators are introducing new abortions plans that directly challenge the tenets of Roe (Roe vs. Wade).  It seems that many Republican law-makers are introducing new bills or ideas which in return are challenged by pro-choice activists and many organizations.

“By passing an intentionally unconstitutional bill, Iowa Republicans have declared that they do not care about the foundational values of our state, or Iowa’s future,

Views on this current issue have appeared to go both ways. I created a few polls for an audience on Twitter to gain a sense of others opinions.

Poll #3: “When pregnancy is caused by rape or incest, do you think abortion should be legal or illegal?

Poll #4: “Do you consider yourself pro-life or pro-choice?

Poll #5: “Do you personally believe that having an abortion is morally acceptable, morally wrong, or not a moral issue?”