High School Football Rules Could Be Changed To Prevent Concussions

New College rules were implemented in a new study to stop concussions, these rules could prevent high school football concussions too. 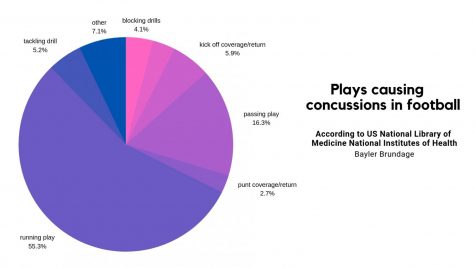 In high school sports, 40.5% of concussions come from high school football according to NCBI. In football, making contact and tackling the opponent is required to play the game. In this contact between players, risks for concussions are high.

These concussions are head traumas that put athletes at risk for serious brain damage and brain injuries that could last for a long time.

Finding ways to prevent these concussions could keep athletes from getting injured permanently or seriously.

According to a study by U.S National Library of Medicine, National Institutes of Health, 5.9% of concussions are caused by kick off coverage and return.

Recently, the Ivy Leagues college football league, introduced a rule to change it’s college kickoffs. From recent research, kickoffs are one of the most dangerous times in the game causing many concussions for athletes.

Touchbacks let runners not have to run the ball and runners can just kneel and the next play will be brought out to the 20 yard line.

These touchbacks let runners’ not have to collide with opponents which reduce concussions.

From this new study of new rules, concussion numbers fell 68%. Along with this number, touchbacks occured from 18% to 50%.

If High School Football changed their rules like the Ivy Leagues rule, concussions would be reduced and young athletes would have a future and not be as vulnerable to concussions.