What happens behind the curtains?

On June 12, the musical of the year, “Heathers” was deemed to dark for school audiences, according to Steve Beckingham, the performing arts director.

“We went back and, we went, OK now let’s talk about the issues: it had in school gun violence, and it had deaths of teenage suicide. And in theatre we are not afraid to investigate these themes, however it has to be a really good piece of literature in order to investigate that.”

According to Beckingham, theatre is a place where you can find yourself.

“It’s about seeing yourselves or being empathetic, but it’s also about investigating themes at least that’s what I think as a theatre director,” Beckingham said.

There are many things to consider when your replacing a theatre program. For example the thespian president Kaelyn Cahill, Senior. Brought up “I’ve been in love with “Heathers” since I was a freshman,”

“And yes, of course I was upset but once we started doing rehearsals I quickly began to fall in love with the musical and the cast.”

In the previous year there have been a number of high profile incidents of gun violence at high schools with “Heathers” “at the very least, it was almost too soon to bring a musical that involved school shootings heavily,” Cahill said. “We didn’t feel comfortable pushing the idea anymore since we knew it wasn’t smart. And it was a bonus because Annie already had experience with ‘Spelling Bee.’”

“It’s a collaborative right? So even when I’m directing I may bring two or three ideas to the table,” Beckingham said, “Thinking about hey, what kind of things do we want to explore this year?” 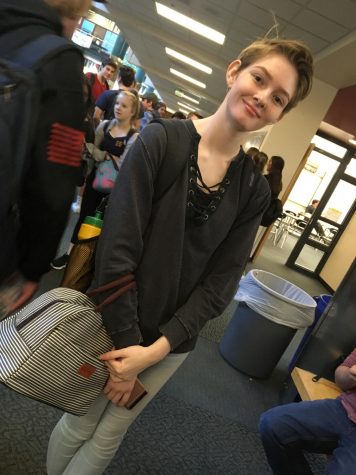 “At the end of the day, the director has a vision and for the people auditioning, your looking to see if your vision is being shown, and that’s how we cast,” Beckingham said.

This year there is a theme and “it’s not about apologizing for it. We’re not looking for normality,” Beckingham said.

“We want to see ourselves reflected in characters on stage” and some of the choices that were brought to the table just weren’t reflecting that. The most important factor in a play is the journey the characters are going through, their finding themselves.” Beckingham said. Adding “I think the musical is going to be very relatable.”

Beckingham is known as the schools performing arts director, but he doesn’t direct all the shows since people seem to connect with him. “Well I have a family and I can’t direct everything,” Beckingham said, “it’s impossible if I wanna see my family.”

“Being an educator and wanting people to experience other people, there’s no point in having the same teacher all the time.” Beckingham said. The idea that “John will always direct something, not necessarily every year, usually a play. Annie is going to direct the musical every other year. I want variety in this program,” Beckingham said.

With “musicals it has to be a collaboration,” Beckingham said. “There’s a production team, a vocal coach, a musical director, and the director.” Beckingham said. But then when you get to play’s it’s basically what you think it is. “Plays are different because there’s just one director, I’m the final say.”

This year the theatre program is doing two winter one acts, and then the winter play. Usually the theatre program doesn’t add extra plays. “I added the winter one acts for the very reason that it would give more opportunities for students,” Beckingham said. And because the musical is such a small cast they decided to improvise. Of the extra plays, Beckingham said, “I had two ideas: first of all, having other staff members direct, and two I also really wanted to do something that was really specific to a theme.”

“I want something the students could really grab onto, which is their identities and how gender plays a role in their lives.”

“The big reason they were all skeptical about having ‘Putnam Bee’ instead was initially because of the lack of opportunities,” Cahill said. “But hopefully the winter one acts and the musical piece for regionals will give everyone an opportunity.”

The fact is people don’t see all that’s going on behind the stage, which is a shame. And to have theatre is to leave an impact on people. And really “it’s about do I have a theme this year, and this year it’s really about identity,” Beckingham said.

Deep down “it’s about seeing yourselves or being empathetic,” Beckingham said. And with “’Spelling Bee,’ there’s a lot of relevance especially considering what’s going on in our school and society now.”