‘We just felt like we needed a change’: protest organized for health curriculum 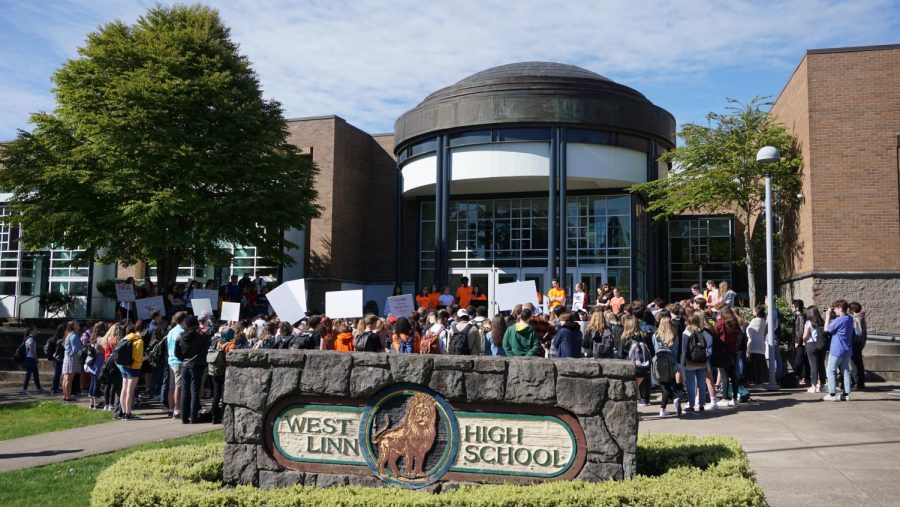 Students gather outside the school to protest gun violence on April 20, 2018.

In support of new health curriculum, juniors Kamerin Villagomez and Audrey Lipsey are among those asking students to walk out on Monday.

The walkout was prompted by Villagomez and her friend Melanie Zumbado after they met with WLWV School Board Member Dylan Hydes during lunch on Feb. 1. They discussed the district’s possible adoption the Comprehensive Human Sexuality Education Plan, which is scheduled for discussion and voting at Monday night’s regular board meeting.

Hydes informed them that, while numerous parents had expressed concerns about the curriculum, no students had.

“With the past few months of the Twitter feud and also going to people of color affinity groups and West Linn United meetings,” Villagomez said, “It’s been feeling like there’s been a lot experiences are being shared that don’t really represent the West Linn district or West Linn High School accurately. And we just felt like we needed a change.”

The curriculum, following state standards adopted in 2015, includes new information on consent, sexual assault, gender identity, sexuality, STDs and other topics. Villagomez and Lipsey felt that introducing this information at a young age would address issues like abuse, rape, depression and suicide.

“This health curriculum is very important to our youth and can impact this generation and can prevent all the negative experiences that we’ve been talking about,” Villagomez said.

The walkout will take place on Monday at 11:15 a.m. Students will share speeches, poetry and music.

Lipsey wants the walkout to inform students who are unaware or unclear of the curriculum’s content.

“Because there are a lot that don’t know anything about it,” Lipsey said. “If they didn’t know about it, they think it was awesome. And then there are other students who have been like—they told me they’re against talking about consent in younger classes, like in grade school. And once we explain to them, ‘Well, they’re teaching that you don’t grab people without permission. You don’t try to hug people,’ you know, like, simpler things when they’re younger, and then slowly moving up, then people are a lot more understanding and support it.”

Villagomez and Lipsey hope that the walkout will send a message to school board members, that students want the curriculum, so the board will vote to adopt it.

Villagomez and Lipsey stressed the walkout is a positive event open to everyone.

“I guess some people think that they’re not welcome to walkouts because they’re not liberal,” Lipsey said, “But this isn’t about politics. This is just about health curriculum. And celebrating positivity.”