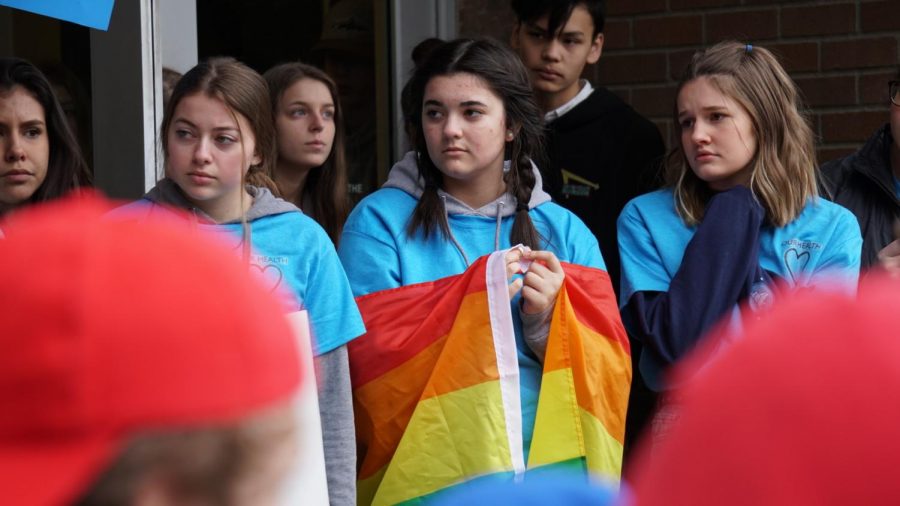 At 11:15 on Monday, Feb. 4, the school grounds became painted in blue. Students fled their classrooms in support of Oregon’s health curriculum, which offers a greater focus on consent, sex ed, sexuality, and gender identity and expression.

The last-minute walk out featured several speeches, poems and songs as a way to influence the school board to adopt a new health curriculum.

The walkout was not through the West Linn High School administration though, and was a result of student activism, organized by juniors, Kamerin Villagomez, Audrey Lipsey and Melany Zumbabo.

Due to the wide range of subjects covered in the new health curriculum, students had differing opinions on why they chose to attend.

“I just heard a lot about this from all of my friends who organized this when we were at regionals. And I just thought that it was a really good cause, so I figured that we need to show the school board that we support them,” Grace Heaton, sophomore, said.

“I think all of the causes it was supporting were important,” Leah Hawkins, sophomore, said. “And I also think that they’re just common sense, so it’s sad that they’re not already being implemented.”

Among the various topics that the new health curriculum covers, one of them is around consent and students sexual health.

“Sexual education is an important thing and abstinence isn’t the only option,” Sonja Bengston, sophomore, said. “Everyone deserves to have the education that they can to be safe.”

“In my health class, to have stuff like consent taken away where someone could be assaulted is just- knowing how to get out of a situation like that and knowing that it’s not a good situation is just super important,” Miranda Wiler, sophomore, said. “And I’ve been lucky with my parents telling me what that stuff is, but not everybody is.”

Outside of sexual health education, students also came to show support for various forms of representation at the high school.

“I have many friends that are gay, bisexual, lesbian and I want to support them in any way that I can, and anybody else who deserves the rights that they do,” Zach Shannon, junior, said.

The health curriculums were supposed to be discussed and voted on during a board meeting Feb. 4 at Meridian Park Middle school, but will be rescheduled due to weather conditions.