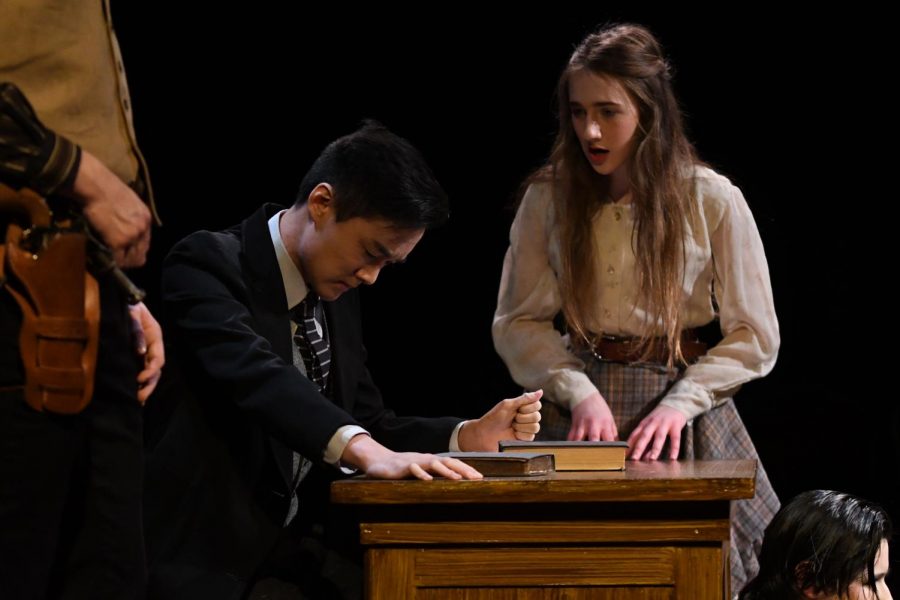 The acting, the stage layout, the dramatic sound design and lighting, “Measure for Measure”, written by William Shakespeare and performed by student actors these past two weeks, was a thrilling and engaging performance.

Edited and directed by Steven Beckingham, of the 18 student actors in the play, nine are members of Thespian Troupe 1915, West Linn’s inducted theatre troupe. On production crew were senior Kaelyn Cahill, co-president of the Thespian Troupe 1915, and junior Kamerin Villagomez. William Shakespeare’s classic genius, the charm brought on by the actors, and the added flair from the production crew made for both a humorous and tragic performance.

Shakespeare’s “Measure for Measure” centers around on the fate of Claudio, who has been sentenced to death by Lord Angelo for a crime he is most certainly guilty of. However, that won’t stop Claudio’s sister Isabelle to try and bargain with Lord Angelo for her brother’s life.

The play’s advertisements warned of mature themes and violence, and a pamphlet was provided to the audience that had a page dedicated to facts about sexual violence in America.

Characters like Pompey “the Clown”, played by Grant Halverson, junior, and Mistress Overdone, played by Sydney Steinberg, senior, were excessively comical. Mischief was expected to be had whenever they walked on stage.

Sympathy flooded the audience as Isabella, played by Ashley Yablonsky, junior, struggled through the main conflict of the play. Her fear and violation resonated throughout the theatre as Angelo, played by Philip Chan, senior, harassed and threatened her. Red lightning illuminated the room, as if more emphasis was needed on the menacing act.

There were times, however, when all the actors would be facing away from one side of the audience, that side unable to see facial expressions of some characters and sometimes even be blocked from the action. While in some cases this could not be helped, it happened so frequently that one must wonder if a flaw was made in the direction of the blocking. Whether a consciously made decision or not, either way it robs from the full experience of the performance of some audience members.

Besides that one inconvenience, the play was well put together. All actors threw their entire bodies into making their character come to life on stage. The sound design and lighting effectively established tense atmospheres above the simple yet effective set design. The performance set the appropriate tones for the matter at hand, and was, above all else, a fun and entertaining experience.