Dear Parents: don’t prepare the road for the child 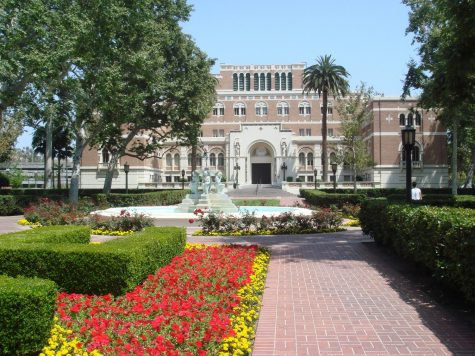 When news broke Tuesday about the college scandal, many people responded with shock. The news that stars like Lori Laughlin and other wealthy elites were bribing their way into colleges like the University of Southern California as well as cheating on entrance exams and fabricating fake athletic recruits was surprising. It compromised the reputation of colleges and admissions officers everywhere.

If you look at the facts, it shouldn’t be surprising. For the past couple of years, the idea of a “lawnmower” or “bulldozer” parent has become a new trend. This type of parent tries to get rid of every obstacle for their kids so that they never have to face it themselves. By doing so, these kids are raised without knowing how to handle challenges and ultimately respond to problems in a harmful and unhealthy way.

This college scam is more intense than what usually goes down, but it follows the same idea. Instead of letting their kid try and fail to get accepted into various colleges of their choice as well as contemplate how they want to handle their future, they are cheating their kids into fancy colleges so that it’s easier for them in the long run. Instead, these kids will never learn about rejection and failure. In more casual scenarios, bulldozer parents will intervene with a teacher about a grade, bring their kid something they want even if they’re on their way to work, parents will never ask them to clean and take care of themselves, and also pay for anything they’ve ever wanted. These kids grow up in pampered lives, and at their first challenge, they face they’ll try to blame someone else or have a mental breakdown.

Still, it’s easy to understand this type of parent. You want to protect your kids and make sure they’re happy and safe. Notably, parents of kids who suffer from mental illnesses like depression and anxiety, they’ll want to make sure their child isn’t in pain. Instead of helping, they end up making the problem worse for their child. These types of parents usually come from backgrounds of feeling shame around failure as a kid or wanting to be a better parent than their own, but ultimately it’s not a good thing to be this type of parent.

What does this say about the kids? How will they grow up? In regards to the college scandal, the leading college at the heart of the scam is the University of Southern California, and they’ve come out to say they might kick out students at the center of the fraud. As the parents are facing legal repercussions, these kids will have to learn what it means to fend for themselves and be back at square one when it comes to college admissions. For other kids, unless challenges are going introduced in their life, they will have a hard time accepting failure and accepting when they’re wrong. They’ll blame others for their issues and collapse inside themselves over every mistake.

For parents who have raised their kid under this spoiled lifestyle, understand that you’re causing more harm than good. You are not setting up your child for an easy life, but one that is very hard. Start introducing challenges into their environment, by asking them to handle school or personal related issues on their own, or not giving them everything they want when they want it. Teach them to be independent, maybe by requiring them to get a license or take care of themselves in the mornings. Even if they are spoiled, these types of life skills will teach them the responsibility that will help them grow up.

And if you’re a kid who grew up with lawnmower parents, it’s not too late to inspire change in your lifestyle. Stop asking your parents to take care of everything for you, instead, start taking care of yourself. You can ask for advice or their take on a situation, but take it into your own hands to email your teacher or make your lunch. Take on some responsibility in the household, and when you make a mistake, realize it’s your mistake and not someone else’s.

Until then, parents– don’t prepare the road for your kid, make the kid for the road.