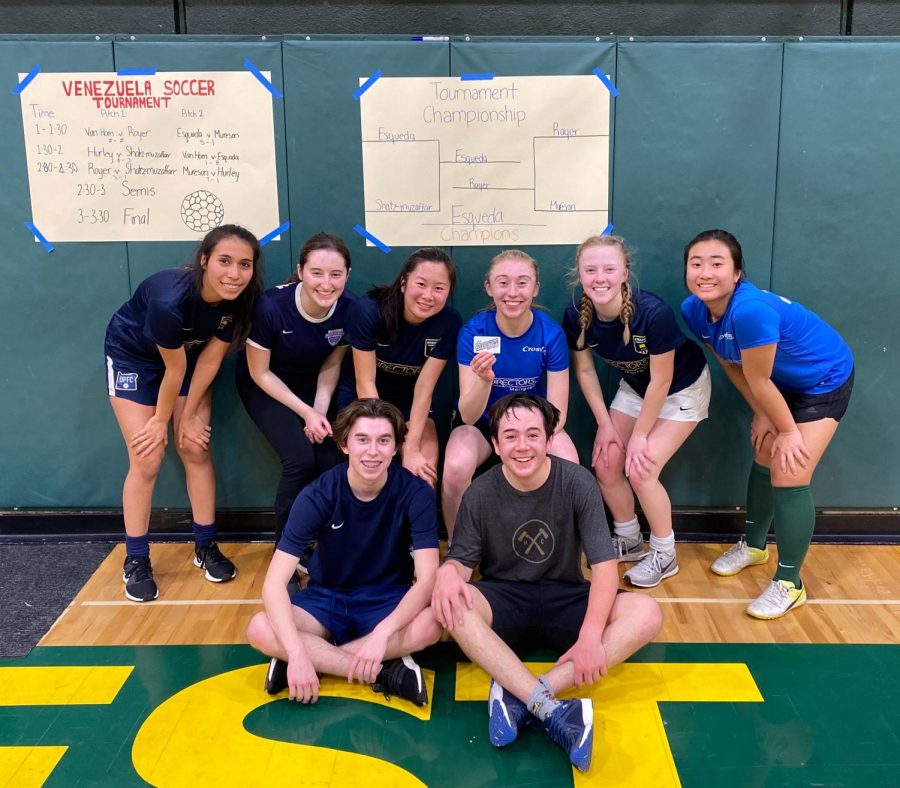 The winning team, Team Esqueda, poses with their prize: a $150 gift card to Lil' Cooperstown. Team Esqueda won the final 1-0.

“We have six teams in the soccer tournament,” Summer Tan, sophomore, said. “They each gave us $8 per player, and we’re using that money to split the cost between supporting the Model UN team when we go to our conference this year, and we’re going to donate the other half of it to help support Venezuelan refugees.”

Each team played two qualifier games. The best scoring teams in the qualifiers went on to the semifinals, and then the winners of each semifinal played each other in the final. “The winning team will get a $150 gift card for Lil’ Cooperstown Grill,” Mariam Hassan, sophomore, said.

Model UN holds a fundraiser every year to raise money to go to the conference, but this is the first time they are fundraising for an organization other than the club itself. “We try to keep [the fundraiser] inspired by the culture of the countries that we’re representing,” Tan said. “One of our countries this year was Venezuela, and soccer’s a big thing there, so we decided a soccer tournament would be fitting.”

Model UN raised $290 through their fundraiser. $200 will go to a refugee organization of the members’ choice, and the other $90 will be used to help Model UN attend the three-day conference on the University of Oregon campus in Eugene. “We go [to Model UN], we get our countries, we get something called our committees where we research and write two papers on [our countries], and then we go to a conference to talk about them with many other schools in Oregon,” Hassan said.

“Our committees will talk about actual problems that the UN in real life might face,” Tan said, “And then we’ll talk about how to solve them.”

Even though Tan and Hassan are only sophomores, they were in charge of organizing the fundraiser. “We got into [Model UN] together last year, it was actually towards the very end,” Hassan said. “The club lost two members and they were looking for two people, and it just happened that me and Summer were two people who were interested. We joined very last-minute, but ever since we’ve been in the same committee and worked together to build each other up and get better at Model UN.”