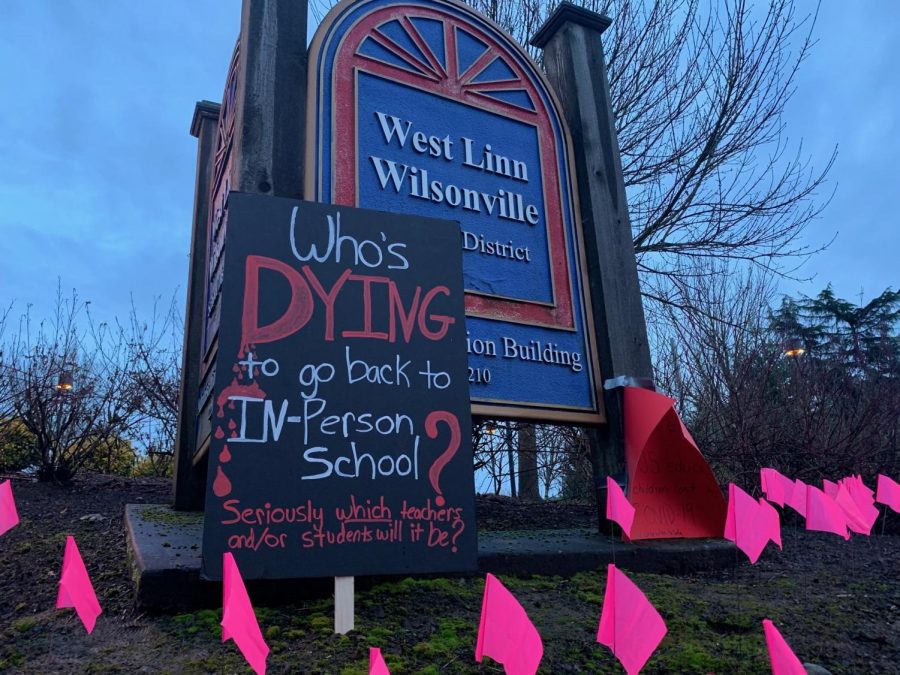 After months of distance learning, West Linn students remain divided over whether they want to return, according to a recent Instagram poll posted by @wlhsnow. In Wilsonville, however, the issue is much less divisive according to Kinsley Dart, a sophomore at Wilsonville High School. "Here everyone wants to go back, there's always going to be a handful of people who don't want to go back just because they are not a fan of school or they instead prefer online school, but I would say 90% of people are ready to be back," Dart said.

A protest appeared over the weekend in front of the West Linn-Wilsonville School District’s district office. On Jan. 10, 600 flags were planted in the ground alongside hand-painted signs advocating against a return to in-person school. Taking place just days before a school board meeting in which returning to school is set to be the primary topic, the protest covered much of the district office’s parking lot and was visible to drivers passing the building on Stafford Road.

Jennifer Cerasin, president of the West Linn-Wilsonville Educators Association, represents roughly 600 of the teachers in the district and was aware that some of the faculty were considering this protest. “It’s a kind of, a memorial calling attention to the fact that people have died from COVID-19 in schools,” Cerasin said. A similar protest took place outside of Portland Public School’s administration building on Jan. 3, also encouraging administrators to keep schools closed.

Black and white signs stuck out amongst the sea of pink flags, one of which read ‘How many yearbook pages do we reserve for memorials?’ This came less than a week after a Wilsonville High School junior passed away by suicide. When asked about it Cerasin said, “I think people have a right to free speech, but that sometimes their intentions are not always clear and that they may have forgotten about that when they wrote that, and I think that’s unfortunate.”

Kinsley Dart, a sophomore at Wilsonville High School found out about the protest when checking her Facebook before she started class on Jan. 11. “I very strongly disagree with their statement because I believe that learning is essential, schools are essential, and teachers are essential,” Dart said. She, like thousands of other students, spends the majority of her week on Zoom learning through a screen. “I think it’s really unfair and hypocritical in a way that teachers claim to want what’s best for us as students, and they want us to learn to our fullest potential and we can’t really do that online.”

Students have now been out of school for over nine months, and Governor Kate Brown has recently made the decision to return to school a choice each individual school district has to make, as opposed to having a statewide mandate.

“We need to get back as soon as possible, like as soon as there’s a plan that can be executed,” Dart said. Neighboring district Lake Oswego has already announced their plans to have Kindergarten through 5th grade in school by March. “I have my family but a lot of kids don’t have that, and when you take away their ability to see other people and just smile at someone, it puts them in a really dark place,” Dart said.

As students and teachers continue to learn in a virtual classroom, the debate for when it is safe to return to school will continue. The West Linn-Wilsonville school board is still deciding what a return to school would look like, and when it could safely happen.