Students, community members grieve the passing of one of Rosemont’s math teachers 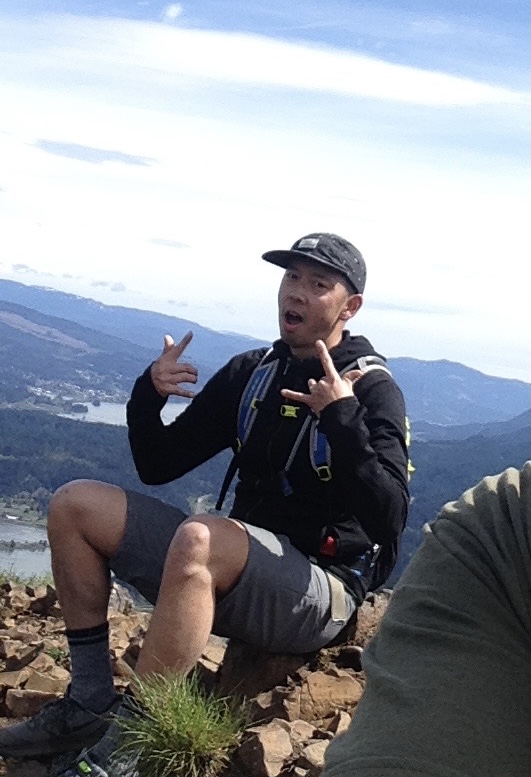 Ben Hsieh at the summit of a hike he did with friend Steve Davala.

Wounding hearts from all around are feeling the weight of loss from the passing of Ben Hsieh, who died Dec. 28 from a heart attack while hiking Mt. Hood. A teacher, father of two, community member and friend, his passing marked a devastating end to the year.

In his 22 years of teaching, Hsieh was an influential figure to those he came in contact with, and through his witty math jokes and compassion for his students in and out of the classroom, he was a teacher that will be remembered by many.

A GoFundMe has been set up by Hsieh’s brother, Matt, with donations going toward a long-term educational fund for his two kids, who also lost their mother in 2019 to pancreatic cancer. As of Jan. 21, the GoFundMe has raised $107,057, with the goal currently set at $120,000 for those wishing to support.

On the page, he also shared this video of Hsieh that he posted for his students at the start of online schooling back in April:

Below is a collection of stories, memories, and moments with Hsieh told by parents, staff members and former students. Now nearing a month after his passing, these stories act as a memorandum to honor his life and legacy.

“My middle school years were really hard, and even though math was my worst subject, Mr. Hsieh always had a smile on his face every single day as he helped me through that class. Despite how his own life was going, he always high fived me and asked me about  how my day was, and if it wasn’t going too well, he would stop and talk to me about what was going on. He would award me M&M’s when I got an answer right after struggling. Overall he built a really positive and uplifting community that I adored being a part of. I’m gonna miss that guy a ton.”

“[in reference to a video of Hsieh dressed up as the school mascot at an assembly] I guess it just made me happy, cause it was the day before summer and we all missed him a lot, it was a few months after his wife had died, he came back as a surprise for everyone, it was really exciting for me cause me and him got a bit close, I told him a lot about me, he always found some way to make me laugh when I had a hard time, it sticks with me cause all I did was talk to him that day, he was really happy, he had this huge smile on his face when his students came up to him, he was just a really good person and I wish he had a longer time with us, I started crying in the middle of this whole thing.

He really loved his cheesy math jokes when I was in his class, each time we went in there’d be a new joke up on the board, it made everyone laugh cause of the dumbness of it, not the funniness.”

“I had Mr. Hsieh for seventh grade math, and what I remember most is the way he taught. If a student really understood a problem in class, and was proud of their understanding, he would have them go in front of the class to show off and help their classmates. He put in so much effort into making sure everyone was organized and felt like they had a support system. He also did this end of the year project, where he made a special google account and students would pair up in teams to film a YouTube video to post on his account, explaining a math topic. He made sure to point out all the things we were doing well, and was always so kind if a student made a mistake. When I was an office aid in eighth grade, many days I would be outside in the halls, just doing homework. If he saw me, he would come sit down at the table with me and ask what I was working on, if I needed help, or how I was doing. Each time, he had remembered something new about me, and he would check in the next time we spoke.”

“Mr. Hsieh was always up for anything. A hike, a game of frisbee, a chance for him to show off his new fancy clothes. One thing I will always remember about him was how he turned things into games. ‘We’ve got to do 10 of these in a row before we can go inside’ kind of thing. I know it’s silly, but I learned how to throw a forehand frisbee throw with him. Every time I’ll throw it I’ll actually remember him ‘forcing’ me to learn how.

He never said no to me driving down to Five Guys and bringing him back food, either.”

“Mr. Hsieh was one of my favorite teachers I’ve ever had. I remember he never failed to make us laugh, my friends and I were always cracking up at the jokes he made in class. I had him twice in seventh grade and I remember in math extension I was in a group project and we drastically messed up the measurements making our project way too big but Mr. Hsieh was just like “go big or go home” so he helped us make this massive contraption of a pendulum wave and it was one of my favorite memories from middle school. He never failed to talk to me and make me feel heard, especially when I got a concussion during the time I was in his class and it became hard for me to do math. I will never forget his ability to make me smile whenever I saw him. His sarcastic humor will always be a highlight of my middle school experience.”

“Mr. Hsieh was a really cool guy, it’s horrible what happened, I never had him as a teacher but I still somehow knew him and came into his classroom often in middle school. He was really funny and welcoming. He also came into the place I work a lot in the past year and he still somehow remembered me from middle school even tho I never had him as a teacher.”

“I never had him as a teacher, but I had classes over by his classroom and I did get the chance to meet him. He had such a fun energy and a ton of my classmates just raved about how much they loved having him. I also loved coming across his funny yearbook picture from when I was in 6th grade. Even though I didn’t really get to know him, I could still, and can still, feel the energy he brought to the community.”

“I was a parent chaperone on a field trip to Tyron Creek with Mr. Hsieh. Sadly our return bus got lost and we were stranded with kids there for an hour and a half. Mr. Hsieh pulled out a blue tooth speaker and set up a dance competition among other things to make that dreadful wait a memory. I’ll never forget that kind, lighthearted approach to a stressful situation!”

“My favorite memory of his is one time when a kid dared him to touch the ceiling. He was jumping trying to and couldn’t, so he took off his shoe and threw it at the ceiling. A simple thing, but it was hilarious to everyone in class and it stayed with me all these years.”

“In 7th grade I needed a teacher recommendation for a camp in North Carolina so I asked Mr. Hsieh if he would be willing and of course he wanted to know more about the camp and when I told him it was a sea turtle rescue camp he called me turtle camp for the rest of middle school.”

“At the end of the year of 8th grade. The whole grade has a karaoke day where kids with talent or not just had fun singing and showing us what special talents they ahd and at the end a few kids and Mr. Hsieh sang can’t touch this and it was so fun to hear him sing and he also made math class fun when I was in 7th grade. Thank you for your wonderful service for the middle (school). I’m going to miss you and you will always be in my heart.”

“Baya and Daisyann are so sad about Mr. Hsieh. Baya doesn’t have a story but he made her laugh and love to be in math class! Daisyann never got to meet him in person due to covid but she loved math because of his humor and kindness. Very sad for our school and all of our friends and family.”

“Mr. Hsieh was one of my favorite teachers I ever had, I remember in 7th grade we would all be taking a test and look up to see him riding his bike around the classroom. Even after I wasn’t his student anymore my friends and I would come to his classroom before school just to get in some laughs before we had to go to class. ONce I had an 88.9% in his class on the last day of the semester so I begged him to give me extra credit and he said he didn’t do that, but he showed me a homework piece that I never completed was worth .1% of my grade, so as long as I completed it and completed it correctly I would get the A I wanted. He was an amazing soul and teacher and even when there were periods of time that he wasn’t able to come to school because he needed to be with his wife/family, he would come back and continue to put smiles on all of our faces as if there was nothing going on in his life that wasn’t funny. Even though we all knew there was. I will never forget him and my heart is breaking.”

“I had him in 7th grade. I have to say he was probably the best math teacher I ever had. My best memories of his are when he would jokingly make fun of students. He always had some sort of comeback that was better than yours and you could always see how much joy it brought him to make the whole class smile.”

“Favorite memory with Mr. Hsieh, skateboarding with him at the park. Dude was a legend and the best teacher ever.”

“I used to walk in Hsieh’s class every day with a snack even though it wasn’t allowed and he always had to have some of it. Eventually I started bringing extra just for him.”

“I had Mr. Hsieh as a teacher 3 year ago and I remember that he was such a fun person that would make us smile everyday. And laugh throughout class. He was such a great, kind person, and it was clear how much he cared about his students.”