Returning to the field 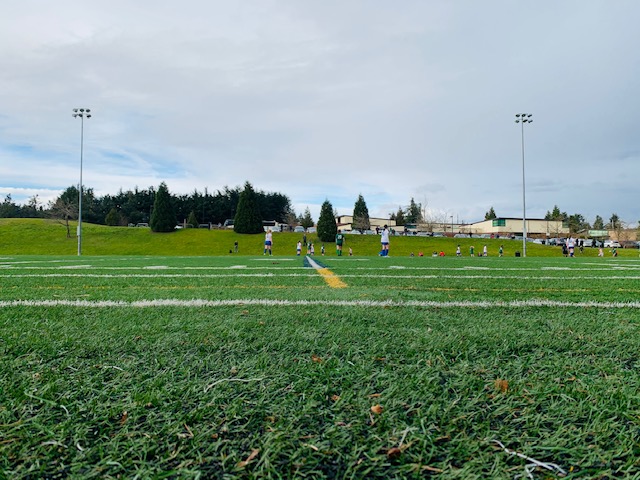 At the first JV 2 women's soccer game of the season, small groups of spectators lined the hillside watching the athletes play.

It’s been nearly a year since the basketball and dance teams got sent home from their respective state championships, and sports, as we knew them, were shut down. Now with the number of COVID-19 cases falling throughout the state of Oregon, high school sports teams are returning to the field. New protective guidelines have been put in place due to COVID-19 and fans no longer line the stands, but high school sports have officially returned.

As students gather for practices and games, they follow strict rules regarding mask wearing and social distancing. Athletics Director, Brigham Baker, is overseeing the return to action for student athletes. “Masks need to be on up over the nose and mouth at all times, practices and games,” Baker said.

Emma Snuffer, sophomore, was one of the students on the dance team that had to leave state last year.  “It’s a little weird coming back to sports because you don’t really get to talk to people, they’re very strict on the six feet rule,” Snuffer said. She and her team are now preparing for competition under the new guidelines.

“I think we’re going to do like 3 or 4 competitions,” Snuffer said. “They’ve talked about sending in a video to the judges, instead of going to a huge event with lots of people.” Fans and spectators have been an integral part of athletics for hundreds of years, however, this year they may be sidelined due to the current limited capacity of stadiums and gyms. Currently, Clackamas County is at a moderate COVID-19 risk level, this means that up to 100 people are allowed to be inside a gym and 150 are allowed to be in a stadium.

“We are going to be able to offer fans in sports while we can, for example, soccer,” Baker said.

Soccer as an outdoor sport would be played in a stadium, allowing up to 150 people to be present at a game. “For soccer, there’s anywhere between 65 and 75 people on the field between players, referees, and coaches, because we could have 150 people, that would allow us to maybe have in the ballpark of 75 people in the stands,” Baker said.

While this plan would allow some spectators to attend games for certain sports, the 150 cap on attendance makes having fans nearly impossible for other sports. The average high school football team has anywhere between 40-70 players plus coaches. To play a game, you need two full teams and referees, bringing the number of people close to 150 very quickly.

Baker said. If Clackamas County were to be moved from moderate risk to low risk the attendance cap on outdoor recreation events would go up to 300, allowing all outdoor sports, including football, to have fans. In order to move into the low risk category, Clackamas County would need to have less than 50 COVID-19 cases per 100,000 people, something that most likely will not happen in time for this first wave of shortened sports seasons to have spectators.

Regardless of whether fans are able to attend games or not, sports are finally back in session, returning yet another small piece of normalcy to student-athletes across the state. “It’s nice to have a team bond back because everyone is in the same boat in dance,” Snuffer said.