NATO: What is it and why does it matter? 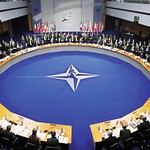 NATO is a military alliance that started in 1949 created in order to protect these countries against the Soviet Union.

Within the past months, tensions have escalated between Russia and Ukraine partially due to Ukraine’s efforts to join the North Atlantic Treaty Organization (NATO), and other issues among the countries. Why is Russia against NATO and what is it?

How did it start?

Originally involving 12 nations, NATO is a military alliance that started in 1949 created in order to protect these countries against the Soviet Union. Since then, the NATO alliance has grown to over 30 countries, including some that broke off from the Soviet Union following its collapse. Some of the countries that are involved in NATO surround Russia, and the alliance has made this country feel threatened due to its growing strength over the decades.

Currently, Ukraine isn’t a part of NATO, but they’ve had significant relations with them since the 1990s. When Ukraine became independent in 1991, it started engaging with NATO and joined the North Atlantic Cooperation Council (NACC) in 1991 and the Partnership for Peace program (PFP) in 1994. Recently, Ukraine has been working toward joining the NATO alliance in the face of threats from Russia. Ukraine wasn’t previously admitted to NATO because of transparency and governance requirements for countries, and the risk of inflaming conflict with Russia. Over the past 25 years, the cooperation between Ukraine and NATO has grown, and, in 2020, Ukraine approved a new security program that includes the goal of becoming a member of NATO.

The NATO alliance is seen as threatening to Russia, as many of the countries who have joined the alliance over the years surround the country.

“Moscow has accused NATO of trying to encircle it,” Washington Post said. “Of the 14 countries bordering Russia, five are NATO members that share six percent of Russia’s land borders, according to NATO.”

Why is NATO relevant to the attacks?

Within the NATO alliance, the countries included have agreed to defend each other and provide aid to countries within the alliance when needed.

Since Ukraine is not a member of this alliance, U.S. intervention isn’t currently happening, although as of now there are economic sanctions on Russia from the U.S. If Russia were to attack a country that is within the alliance of NATO, then all of the countries within the organization would get involved. This is the only thing preventing NATO-affiliated countries from directly engaging with Russia. If Russia spreads the conflict into a country protected by NATO all of the countries in NATO would retaliate.

The U.S. Secretary of Defense, Lloyd Austin, emphasized the obligations of the U.S. under Article 5 of the NATO treaty. Article 5 on the NATO treaty states that all countries involved are obligated to take action if it’s necessary if one or more of the countries within the alliance are attacked.

Why did they get involved?

On Feb. 25, NATO announced for the first time that they were deploying parts of a response force to Eastern European countries as a precautionary measure because Russia continues to advance on their invasion.

“NATO will continue to send weapons to Ukraine, including air defense, though it did not commit to sending troops to the nation,” Nik Popli, from TIME, said.

As the conflict between Russia and Ukraine unfolds, NATO is becoming more involved than previously stated. As of Feb. 25, NATO activated a response force for the first time ever, including land, sea, air, and special operations that can be deployed quickly. This defense force includes 40,000 troops, but none will be sent directly to Ukraine, it is being deployed to nations bordering Ukraine.

“The activation of the response troops does not mean that any US or NATO troops will go into Ukraine, which is not a member,” Barbara Starr and Jeremy Herb from CNN, said. “U.S. President Joe Biden has been clear that U.S. troops are deploying to Eastern Europe to help bolster NATO countries nervous about Russia’s aggressive actions, and they will not be fighting in Ukraine.”