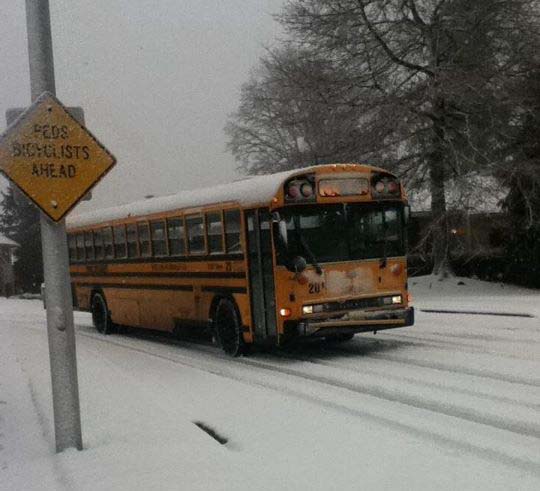 With all the drama on this snowy Jan. 17, some students are forced to be stuck with the peculiar weather at home rather than at school. Many students had to stand outside in the frigid cold weather with constant snow over their heads waiting for buses that barely managed to show before frostbite hit. Some students were forced to wait for their designated buses on the new snow routes for half an hour before finally being picked up.

Madison Smith, sophomore, was waiting at his bus stop with nine other people for 30 minutes for Bus 34 near Rosemont Ridge Middle School. When they saw a yellow bus diving towards them, their relief was short-lived. It was a different bus for a different route that slid and got stuck for four minutes before cautiously continuing its route.

“My bus never even got to the stop before it got stuck taking some kids down to Cedar Oak,” Smith said. “We saw a bus coming but it was on a different route. We saw it suddenly slide and get stuck for a while. I saw a bunch of pictures of buses when I got home.”

Smith’s friend’s father finally called the bus service to see what was going on, and they told them that their bus was stuck picking up kids for the elementary school. Smith eventually got home and ended up missing school today. He is one of many students who suffered from the various bus delays and crashes in the midst of this snowy day.