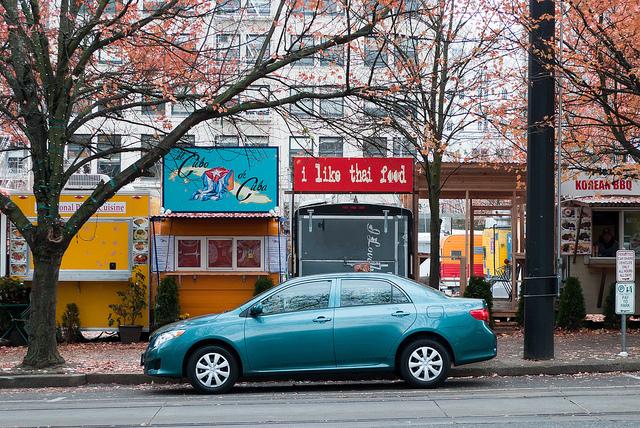 It’s not every day that Portland is acknowledged for anything other than being the gloomiest state in the U.S., but this month, Portland was recognized for its diverse and friendly food carts. In fact, Portland was ranked number one by U.S. News. Close runner-ups included Singapore and Istanbul, Turkey.

Food carts can be found all around the world. They are a cheap alternative to an expensive restaurant, or are lifesavers when on a tight time schedule. Not only are they convenient, they are an amazing way to taste some of the local delicacies.

According to Gourmet.com, Portland’s community of snack vendors are working hard to supply a variety of cuisines in an efficient and cost-effective way. This was one of the many reasons as to why Portland took the first spot.

“The name drew me in (Waffle Window), and there were a lot of options, such as vegetarian meals, for a reasonable price,” Allie Kirsch, junior, said. “It didn’t taste half bad either.”

A large majority of food carts are located in “pods” around downtown Portland. Each pod consists of anywhere from five to 20 food carts, all varying in cuisine. Walking among one of the pods, it is possible to see Mexican, Vietnamese, American, Tai, Italian, Indian, Chinese and many other types of food. Prices vary, from $1 to $10.

Last spring, some staff members were able to enjoy some of these street vendors during a field trip. Charlie Craft, junior, reviewed Big A** Sandwich. Below is an excerpt:

“…The chef was right to forewarn, you really do have to eat that thing like a burrito! The sandwich itself was great, a double-punch of umami to the palate. The sweetness of the fat from the Swiss cheese and the meat itself plays well with the salty-savory taste of the fries and the au jou. The crunch of the fries and the edges of the ciabatta bun make this a kick-a** sandwich!”

To find out more about food carts in Portland, check out http://www.foodcartsportland.com/. They have food cart locations, reviews and other general information.