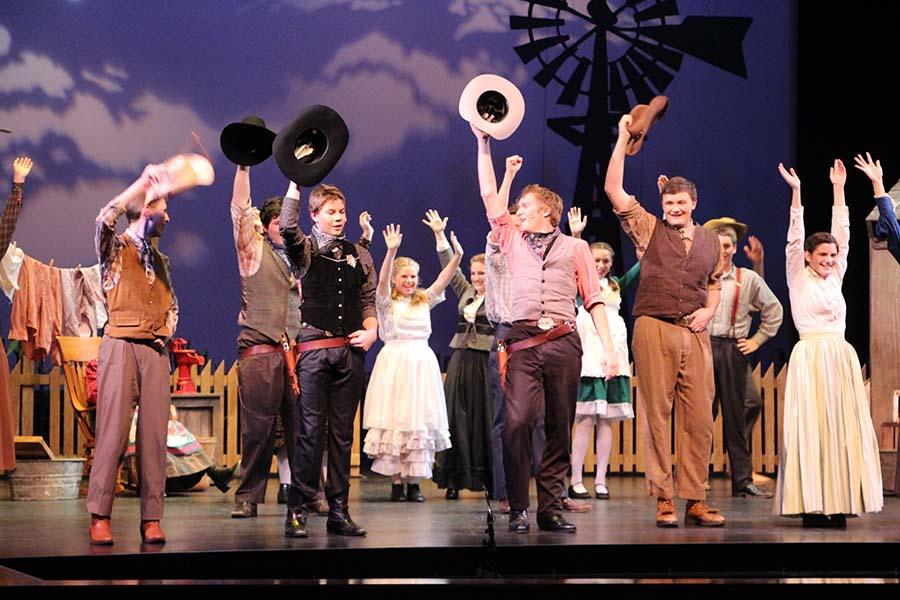 In the first act, Curly tries to court Laury into attending the town dance with him, while her Aunt Eller watches on. Laury refuses and flounces away, thinking Curly is joking. Instead, lonely, disturbed farm-hand Jud Fry asks Laury to the dance and she accepts, though she is afraid of him. The rest of the musical follows Laury as she battles with her fear of Jud and her confusing love for Curly, along with side narratives of different characters’ romances and troubles.

As someone who is not a huge fan of musicals, I did not expect to enjoy Oklahoma nearly as much as I did. Mitchell, who played Laury, has an incredible singing voice, which alone would have made the musical worth it. Carr, portaying Curly McLain, was an unexpected choice for the role, yet delivered well and had great chemistry with Mitchell. Ellie Jones, senior, also fit the role of wise Aunt Keller perfectly. As well as good acting, Oklahoma! also featured an impressively designed set.

The only downside to the show was that it ran a bit too long. With intermissions, the show ran for about 2 hours and 50 minutes, at which point I was feeling a little restless.

Overall, I would give Oklahoma! an A-. The charming storyline and acting worked great for a high school stage, while Mitchell’s singing would have fit in on Broadway.