“The Martian” made $55 million dollars in its opening weekend 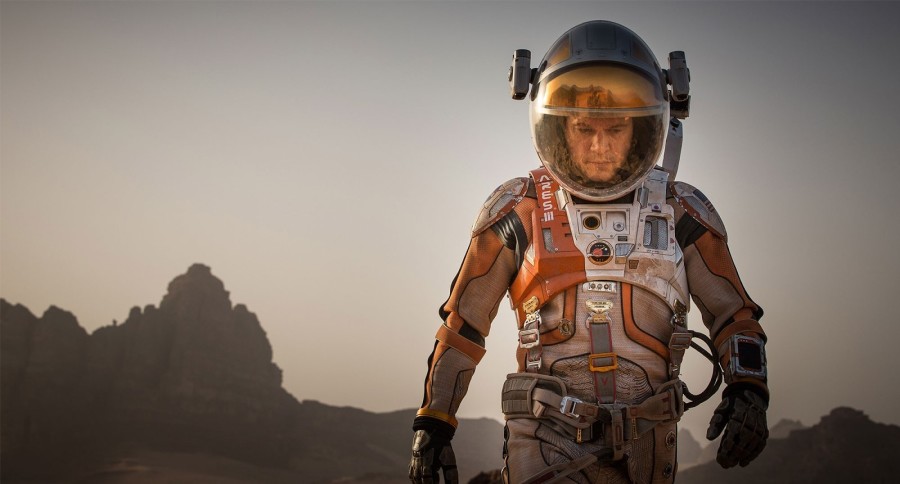 Mark Watney, played by Matt Damon, traverses the martian landscape after being marooned on Mars. “The Martian” earned $55 million dollars in its opening weekend with a budget of $108 million.

“The Martian”, directed by Ridley Scott, has a gripping plot that will grab science fiction lovers immediately. Starring the comical Matt Damon, as NASA botanist Mark Watney, the movie is not only comedic but also scientifically accurate.

With stunning shots, Scott was able to portray Mars as a lonely, desolate wasteland. Filming in the desert of Wadi Rum in southern Jordan allowed his team to depict the sprawling reddish martian surface in a believable manner.

While praised for being scientifically accurate, it has been made clear and was well known by author,  Weir, that the opening scene is unrealistic. Because the atmosphere on Mars is less than 1% the thickness of Earth, the wind wouldn’t be able to produce enough force to tilt a heavy spaceship, or Mars Ascent Vehicle (MAV) as referred to in the movie. Despite this, “The Martian” is a science fiction movie, not a documentary, so this scene is justified by the intense plot.

“The Martian” retained much of the comedy found in Weir’s novel but excluded a few significant scenes. Due to time restraints, many of the scenes involving the makeshift rover and Watney’s final journey to the ARES 4 sight were cut. Although they fit in the book, it was for the best that the movie excluded them.

The actors did a phenomenal job recreating the characters laid out in Weir’s book. Jessica Chastain, playing commander Melissa Lewis, accurately displayed the emotional reaction after realizing she had left Watney alone on Mars when evacuating the storm. The rest of the crew were a bit dull, however the book didn’t develop those characters excessively.

After a successful opening weekend and a “certified fresh” review on Rotten Tomatoes, “The Martian” was a huge success. Matt Damon’s role fit him like a glove and paired well with renowned sci-fi director Ridley Scott. Together, they recreated the wonderful and intriguing experience I had while reading Weir’s novel, which leads to my score of A for “The Martian.”