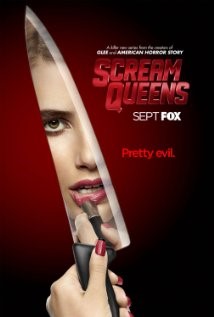 Has producer, Ryan Murphy, overstepped his boundries? A review on the new TV series, #screamqueens .

American Horror Story meets Glee in the new television series, “Scream Queens”, which started out disappointing despite the impressive build up to the pilot through social media. It was not quite what I was expecting as far as a horror-comedy went.

In the big picture, the show could be entertaining if you were a young teen or anyone with distasteful humor. The show obviously targets the younger generation with the romanticization of sororities and young adult life. The excessive gender roles and racial slurs threw the show under the bus for good with the stereotypes of “dumb” blondes and the “white” cleaning lady.

During the first six minutes, I was already rolling my eyes thinking, “what else can I be doing with my time?” as a young woman gives birth in a tub during a party, while her friends call her disgusting and leave her to die.

Not only was the storyline slightly disturbing, it was very bland and unoriginal. Because it starred well-known actress Emma Roberts as Chanel, the story seemed to revolve around her. She has been seen as an exceptional actress in her most famous series, “American Horror Story”, but her performance in “Scream Queens” is not on par.

“Scream Queens” feels like an extension from season three of “AHS” with a witch sorority using the same kind of problems and mysteries.The show is  meant to be a spoof on other horror movies and references a wide variety of other popular movies like “Mean Girls”.

A plus of the series were the wide variety of famous actors that made an appearance. These people included Lea Michele, Jamie Lee Curtis, Diego Boneta, and even a surprising debut from Nick Jonas. All these actors and actresses have starred in many other shows and films, but their roles in this series seemed rather random. “Scream Queens” was definitely a risk these actors were willing to take.

The creator, Ryan Murphy have produced a number of television shows in the past; including “Glee”, Season three on “AHS”, and “Eat Pray Love”. “Scream Queens” is his most recent and current show, but his work seems to interweave with itself.This show is like “Glee” meets “AHS”.

My general consensus for this show is that it’s lacking originality.  Although this is a comedic TV series and the acting is supposed to be bad, it just doesn’t quite cut it as far as worthy entertainment goes. Expectations aren’t quite at an all-time low yet, so the show can still redeem itself. Tune in Tuesday at 9 p.m. on Fox. It screams bad taste.