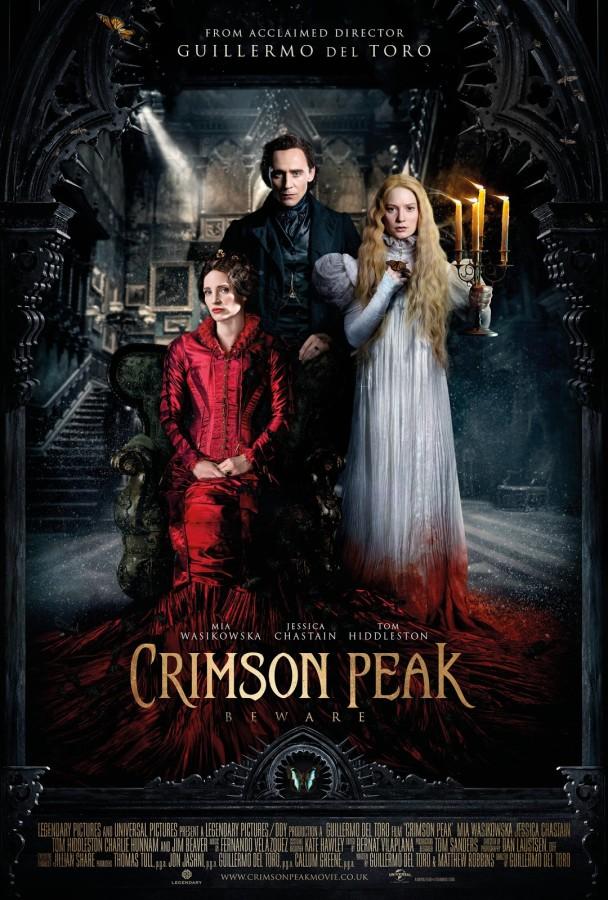 “Crimson Peak” was filled with ghosts, love and strange moments.The movie was a love story but it was filled with ghosts and other paranormal phenomenons.  Edith Cushing played by Mia Wasikowska comes off as both scary and loveable as she develops a strong attachment to Thomas Sharp played by Tom Hiddleston despite her father’s disapproval. The horror film pulled off special effects like ghosts and  beautifully gothic sets. The contrasting colors of the movie helped the creepy elements that director Guillermo del Toro is so well known for. The ghosts that haunted Sharp’s castle were really different from other movies, which I liked, it stood out against aged backdrop with their flowy, detailed and effortless design. They added to the vibe of the movie and also managed to really creep me out.

Hiddleston was a believable actor and played a mysterious Sharp. Edith’s friends strongly opposed to the charming Sharp. There were obvious clues that Sharp is was not exactly who he says he is.

The relationship between Lucille Sharp, played by Jessica Chadstain, and her brother was pretty weird and made me uncomfortable. It was no surprise when the two ended up being incestual. We never got to see the direct reaction from Edith, his wife. At the beginning of the movie Edith’s father is murdered and although the audience eventually figures out who it was,we never see Edith figure it out which seemed like a plot hole to me. Even after the movie ended I had a lot of questions about the plot and why certain things happened.

Edith was a helpless character; after getting seduced by Sharp she drops everything and moves across the pond with him. The only two women characters in the movie were Edith who was very naive and Lucielle, who was incestual and crazy. Edith gets saved by another male character at the end and gets so chance to save herself or even stand up for herself. It seemed to be a very outdated stereotypical damsel in distress story

I would give the movie a B- because it had a good creep factor  but the plot lacked dynamic. The idea of the movie was original but it seemed to drag on without capturing the audience’s attention. At the start of the film I was really into “Crimson Peak” but towards the end, I just wanted it to be over.