“The Hateful Eight” proves to be a fantastic movie-going experience

The film that must be seen in 70mm 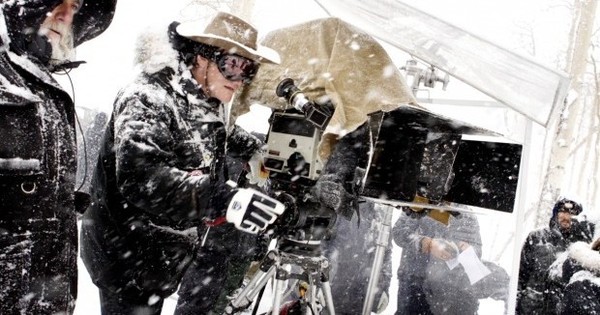 Quentin Tarantino (right) and Director of Photography Robert Richardson (left) are seen framing up a shot in the cold. The cameras and lenses used in the production had not been used for almost fifty years and had to be restored back to working order to be used in the film. The 65mm cameras allow for the film to be seen in special 70mm roadshow showings in 100 venues across 44 different cities.

“The Hateful Eight,” with its roadshow release, is truly a viewing experience that needs to be seen. Portland’s own Hollywood Theatre is one of only 100 theaters showing the film in glorious 70mm; the largest film projection format available.

In addition to seeing the movie projected in actual film as opposed to digital projection, the 70mm release adds an overture, a twelve minute intermission and footage that can not be seen in any other release. Moviegoers are also provided with a program exclusive to the roadshow release.

All of this harkens back to the old days of movie going, when theaters provided more incentives to come see films on the big screen. Tarantino has clearly put a lot of work into this release, and while some think it is just a marketing gimmick, it feels like a spectacular viewing experience from a visionary who cares about the way his films are experienced.

The film itself begins like a typical western. Rugged bounty hunter John “The Hangman” Ruth (Kurt Russell) is making his way to the town of Red Rock by stagecoach to claim his bounty for his capture of outlaw Daisy Domergue (Jennifer Jason Leigh).

Along their journey, they stumble upon Major Marquis Warren (Samuel L. Jackson), who they quickly discover to be an infamous bounty hunter, as well as Chris Mannix (Walton Goggins), who says he has been appointed as Red Rock’s new sheriff.

As the storm worsens, the group decides to stop at Minnie’s Haberdashery and wait for the weather to clear up. There, they meet a few more characters, including the hangman for Red Rock Oswaldo Mobray (Tim Roth).

Avoiding spoilers, a series of events transpire in the haberdashery which turns the film into a Clue-esque mystery story, making it clear many of them are not quite who they say they are.

Being an ensemble cast film, it can be hard for the audience to properly understand each character, as some of them go underutilized or underdeveloped. In “The Hateful Eight”, this is not the case.

Each character is fascinating in their own right and they all have multiple layers of depth that are uncovered one by one as the movie progresses. Every cast member is a veteran Hollywood actor with an exceptional on-screen presence.

Russell, most well known for “The Thing (1982)”, has been in the industry for over 50 years and he proves his place in this film, giving a gritty, intense performance as the rugged bounty hunter.

Some of Samuel L. Jackson’s best performances have been in other Tarantino films, most notably Jules in “Pulp Fiction”, but his performance in this film rivals all of them. He truly brings the character to life with his impressively entertaining acting. How he didn’t get nominated for best actor is beyond comprehension.

Walton Goggins, one of the lesser-known actors in the cast, holds his own amongst the rest, especially in the final moments alongside Jackson.

Jennifer Jason Leigh, whose character also feels somewhat less important in the first half, really starts to shine towards the conclusion and rightly deserved her best supporting actress Oscar.

Finally, Tim Roth, Michael Madsen and Bruce Dern play characters that are not nearly as important as the rest but they all still give great performances and each have moments that are entertaining to watch.

While actors often make or break a film, the technical aspects are equally as important. In order for the film to be released in 70mm, Tarantino and his director of photography, Robert Richardson, worked closely with Panavision to resurrect 65mm film cameras and lenses that had been sitting in Panavision’s stock for over fifty years.

Quentin Tarantino was adamant about using the format, as with anamorphic lenses, it is capable of producing the widest aspect ratio possible: 2.76:1.

The film’s cinematography greatly benefits from the format, especially during wide landscape shots. It captures the grandeur and beauty of the locations better than standard equipment.

While most of the breathtaking exterior shots occur in the beginning, even in the film’s second half, almost exclusively taking place inside, Richardson still manages to make every shot beautiful.

It’s one of the best looking films made in recent memory, and at least as visually impressive as past Tarantino/Richardson collaborations such as “Django Unchained (2012)” and “Inglourious Basterds (2009)”. Richardson definitely deserved the Oscar nomination for cinematography.

The third and final nomination for the film was for it’s original soundtrack, which is a new trend for Tarantino’s work. In his earlier work, the soundtracks were comprised from selections of previously recorded music, so the turn towards originally composed music is a nice change.

Composer Ennio Morricone actually wrote the music without seeing the film and instead wrote based on the script. In addition, he reused previously unreleased tracks from John Carpenter’s “The Thing” which makes the well-fitting moody score even more impressive.

This film deserves every Oscar nomination received and then some. “The Hateful Eight” is a well-crafted movie in every sense of the term. It is a Tarantino film through and through with its gore and language, making it deserving of an R rating.

Even to those who don’t enjoy Tarantino’s brutal style, this is a must-see movie. You could wait for it on Netflix, but the 70mm roadshow release is a much better way to watch the film (not to mention that you’ll see it much sooner).

It has such a compelling story and cast of characters that it is worth watching, even if that means looking past the violence. On the other hand, for those who enjoy Tarantino’s work, they’ll be right at home.