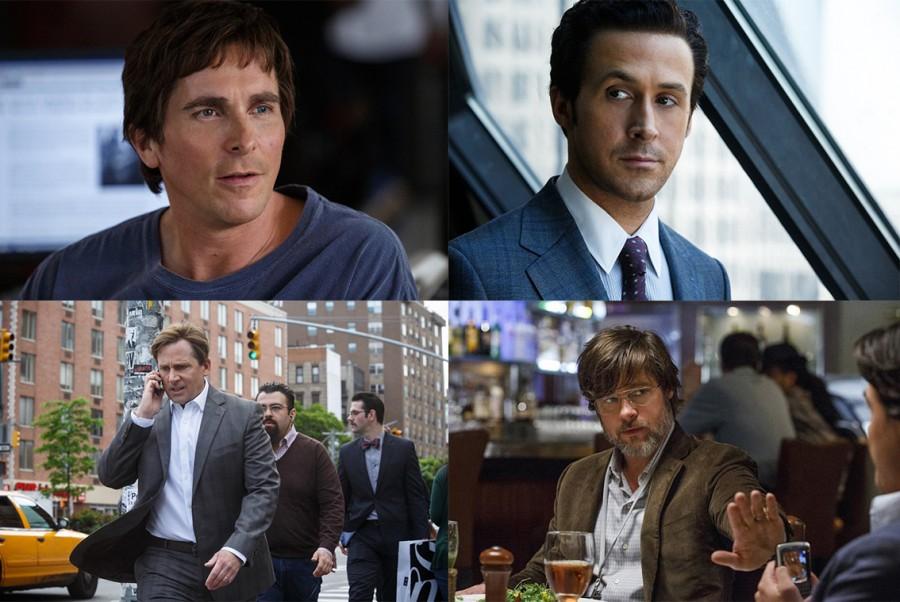 From top-right with Ryan Gosling and moving clockwise, Brad Pitt, Steve Carell, and Christian Bale embody their real world counterparts in “The Big Short.” Depicting the housing market crash of 2008, “The Big Short” landed in theaters in 2015, and received excellent ratings across the board. The film has been nominated for an Oscar for best picture, since its release.

From Selena Gomez explaining synthetic C.D.O.s with blackjack to Margot Robbie explaining economic terms while sipping champagne in a bubble-bath, “The Big Short” makes the complicated situation which led to the stock market crash of 2008 understandable for anyone. From hilarious scenes, to footage from 2008 that brings viewers to tears, the rollercoaster ride of emotions makes the historical drama surprisingly compelling.

“The Big Short” follows three separate teams of economic geniuses who managed to predict and benefit from the economic crash two years before the event impacted the global economy.

This film begins with Dr. Michael Burry, played by Christian Bale, who was the first man to discover the possibility of a housing market crash. Mark Baum, played by Steve Carell, is the leader of the second team of wayward economists that worked independently in a bank. Simultaneously, the third team, comprised of the amatuer stockbroker trio of Ben Rickert, Jamie Shipley, and Charlie Geller, played by Brad Pitt, Finn Wittrock, and John Magaro, made this same discovery.

Of all the excellent performances by the actors, one man stood above the rest. Carell, the primarily comedic actor made famous by his performances in “The Office,” “Despicable Me,” and “Anchorman,” proves his ability to be an excellent dramatic actor in “The Big Short.” His character is loud and obnoxious and causes most of the laughs throughout the film, but as his team exposes the corruption of the housing market, Carell slowly becomes more furious at the system and begins to have empathy for the millions of people who would be hurt by the crash.

The cinematography accents the actors emotions and is extremely interesting in “The Big Short.” Through its use of intentionally imperfect camera work that is reminiscent of documentaries, and the fantastic performances of the actors, “The Big Short” makes the incredible men showcased feel like the real people they portray. The varying tightness of the shots makes the film feel like a documentary. Through this variability, some scenes feel spacious and grand, whereas others feel cramped and tight, allowing for the actors to emphasize their emotion.

Hands down, the best part of “The Big Short” is how the film shows an entirely different perspective on the housing market crash from what most Americans know. While most of America sat idly by, letting fraud and malpractice go on unnoticed, ten men from America predicted that a crash would occur, leading to millions of people losing their homes and jobs, yet only their friends knew anything about their discovery.

Not only does “The Big Short” have quick-witted comedic scenes and serious dramatic scenes, but it’s also informative about the crash itself. This film feels more like an experience than a stereotypical movie, with the actors reenacting moments in order to help people understand these events. This is accentuated by actors breaking the fourth wall, stopping the movie to speak directly to the viewer, either to explain events in more detail or to interject with a comment on which events are slightly inaccurate in the film.

This year, “The Big Short” was nominated for and won the Academy Award for the best writing in an adapted screenplay, and it shows. The incredible book by Michael Lewis has become an excellent film.

This film is interesting, fresh, and has something to say about the prevalence of greed and corruption in America. For anyone who cares about history, wants a new perspective on the global event, or just wants an superb movie experience, “The Big Short” is a much watch when it comes out on DVD and Blu Ray™ on Mar. 15.