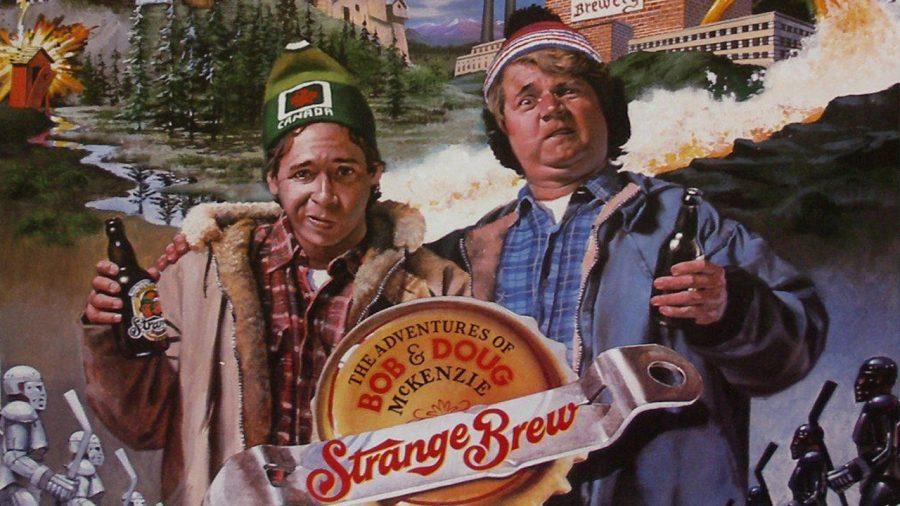 Have you ever wondered what an oddball, slapstick, jelly-filled Canadian SNL movie would look like? Look no further than the 1983 slapstick comedy “Strange Brew”. The movie’s premise is like the name: strange. It follows the colorful characters of Bob (Rick Moranis) and Doug (Dave Thomas) McKenzie, as they land factory floor jobs at their favorite beer company’s brewery. Sadly, the fun doesn’t last long, as strange paranormal happenings begin around the brewery grounds. Inquisitioned by the owner’s daughter, the brothers set out (or stumble) to figure out what peculiar things happened in the brewery.

Personally, this movie is not only one of my favorite slapsticks, but it also has a special place in my heart. Whether it’s the nonsensical plot devices that somehow keep the movie going strong, or the hilarious and outrageous characters, this movie will make you laugh so hard you might start crying. Even from the intro logo, when they crack a joke at the MGM lion, the movie is already rapid fire slapstick.

I was really impressed by how many jokes hit. Usually, in a comedy like this, you’ll have so many jokes that the overall ‘accuracy’ of funny ones are at about 60 percent, or lower. This movie, however, is in the upper 90 percentile, and has good jokes evenly dispersed throughout the movie, even catering to an inside joke every now and again. Though I can say there are some weaker scenes, especially when it comes down to dialog, they don’t take from the movie, and are usually transitional scenes.

As hilarious as this movie is, it is a slapstick comedy, Which may not be for everyone. However, if slapstick is right up your alley, then “Strange Brew” is for you.