A look back to see if “Jaws: the Revenge” deserved its criticisms 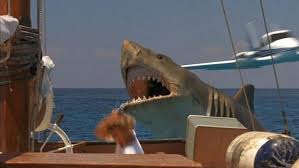 After the critical acclaim the original “Jaws”(1975) received, the franchise that followed after quickly fell short, getting fewer compliments and more criticisms as each new film was made and released. The worst of the worst, which came at the end of the franchise, was “Jaws: The Revenge”(1987) which received a zero percent, the absolute worst score possible.

“Jaws” (1975) is an undeniable classic whose praise and fame was exploited by its successors. As each installment was added they got less and less praise, and criticisms became the mainstream response to the films. The first sequel of the “Jaws” franchise, “Jaws 2”(1978) got significantly less praise than its predecessor getting a score of 52% on Rotten Tomatoes compared to “Jaws’” 97%, but it still held some of the former’s glory. Up next was “Jaws 3-D”(1983), which did even worse than “Jaws 2,” getting a measly 11% on Rotten Tomatoes. Finally came the worst of film franchise; “Jaws: The Revenge” (1987) which received the worst score possible: 0%.

Did “Jaws: The Revenge” deserve the lowest score possible? Did it truly stray so far from its famed predecessor that it landed on the opposite side of the scale? Possibly “Jaws: The Revenge” did deserve it’s score, but it’s more probable that Rotten Tomatoes was being a little mean. While no “Jaws” and certainly no “Citizen Kane”(1941), it didn’t deserve that 0%, though in no way did it deserve anything over 15%

The premise of “Jaws: the Revenge” is simple; the family of Martin Brody (of the original film) is terrorized by the shark that caused the patriarch to die of a heart attack, and who continues to seek revenge on the entire Brody family, and goes after members one by one.

Within 15 minutes of the movie the younger Brody son Sean (Mitchell Anderson), the town deputy, is sent out to separate a log from a buoy in the bay, resulting in a shark coming out of already-bloody-water to attack the deputy.

After her son’s tragic death, Ellen Brody (Lorraine Gary) goes down to the Bahamas on a whim to be with her older son, Michael (Lance Guest), and his family as he works to get a doctorate in (presumably) marine biology, and on the fly down meets Hoagie Newcombe (Michael Caine), a British pilot.

The rest of the film proceeds to follow the Brody family as they try to escape the killer sharks revenge, a task that is especially hard to do as the family lives on a tropical beach. Southern beaches are not a sharks usual living environment, something that is repeatedly used to strengthen any argument that the shark is set on revenge.

“Jaws: the Revenge,” while full of flaws, is still enjoyable to watch, especially as a pick-me-up film. Enjoy the fluctuation between over and under-acting presented by the actors, along with the awkward transitions, silent filler scenes and weird character transactions. There’s also the shark attacks that are filmed in pre-attack water that is somehow already bloody water and that feature a shark that doesn’t really move its body except to open its mouth, if that is more of a draw.

It would be ridiculous to think that a movie (that is part of a franchise that continually gets worse) could possibly compare to a classic. “Jaws: the Revenge” shouldn’t be viewed as a horror or action film, it simply doesn’t cut it, but as a comedy. There multiple unintentionally funny parts and elements present throughout the film, such as the fact that most of the characters go through at least one chunk of time where they’re inexplicably absent, or the random moments of overacted drama, or even the unexplained sketchiness of Hoagie.

“Jaws: the Revenge,” in all honesty, is great to watch. It’s not something to watch if good movies are more your thing, but if you’re looking for a fun time, this is the movie to enjoy as you kick back or laugh at with your friends.