Cheap, authentic Vietnamese food is the staple of Saigon Food-to-Go 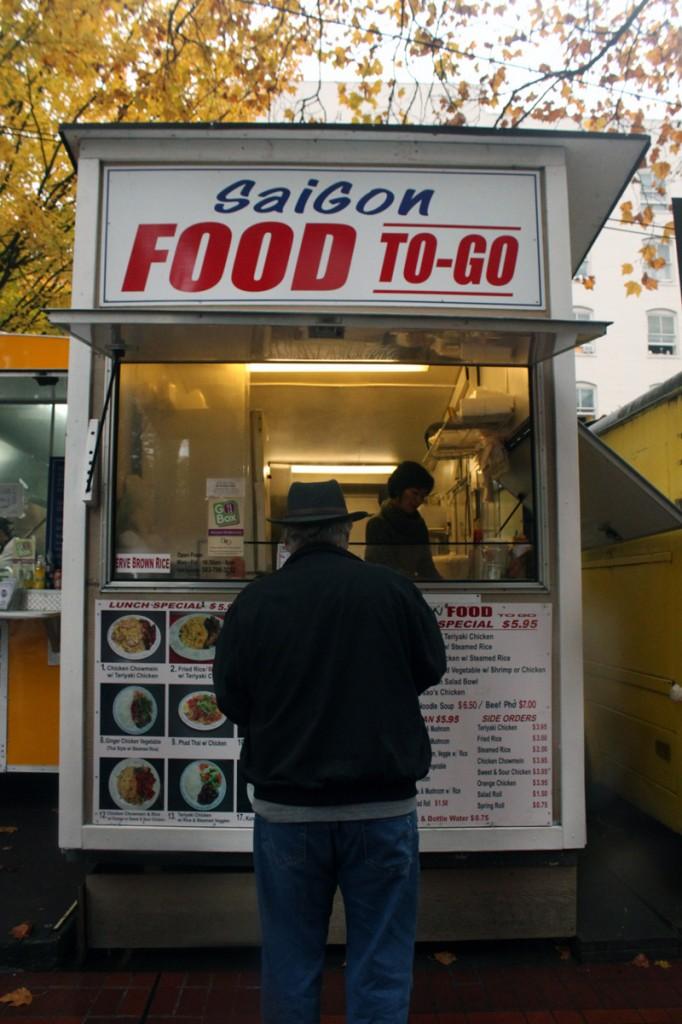 The sample was what drew me under the eve of this authentic Vietnamese food cart in downtown Portland. With a smile the owner handed me a toothpick on which was speared the signature culinary art of Saigon Food-to-Go: a chunk of tender, delicious chicken smothered in a flavorful sauce reminiscent of teriyaki.

The large, easily-readable and conveniently-placed menu displayed many dishes and many combinations. Since chicken is a staple of Vietnamese diet, there weren’t many vegetarian options.

There were a few other customers hanging about, waiting in line or for their food, and as the owner, a Vietnamese woman, both prepared food and took orders, she also chatted with me and others standing outside, obviously recognizing most of them. I ordered a “#11”, which included the teriyaki chicken I had sampled, rice, veggies and noodles. The wait for my food was only three or four minutes, and before handing it to me the owner asked me if I wanted any “spicy,” which is a mixture of hot sauce and kind of pepper.

Upon eagerly opening the box, a wave of many different pleasant smells assailed my nose, mostly spices I had never before encountered. The food tasted even better than it smelled: savory, sweet and the “spicy” was indeed so; the food was presented in an honest but appealing way.

Located on Southwest 5th Street and Stark, Saigon Food-to-Go is open Monday through Friday from 10:30 AM until 5 PM. Yelp rates the price range as “Cheap,” with which I have to agree.

I had never tried Vietnamese food before, so it’s difficult to compare Saigon Food-To-Go to a restaurant, but there is, without a doubt, no quicker way in Portland to score a more authentic and delicious taste of another culture.

I give Saigon Food-to-Go four stars out of five due to outstanding service and delicious, authentic Vietnamese food.