School cafeteria has become a thing of the past 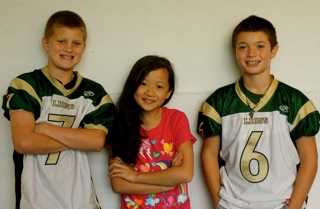 Recently, the West Linn Wilsonville School district has made the switch for some primary schools to take lunch time inside the classroom. The new lunch routine in West Linn primary schools has left people hungry for more information.

The cafeteria used to be a place to take a break from learning and enjoy a meal whether it be from home or school, but now is used for inside recess on rainy days or after school programs.    The cafeterias had a small seating space, and because there were only a few classes who ate in the cafeteria at a time, certain tables were assigned to certain teachers, therefore limiting them from sitting with their friends.

Aylish Clayton, Brodie Corrigan, Maddie Khamphilavong and Justin Hoover, 5th graders at Willamette Primary, volunteered to give their opinion on what they thought of eating lunches in the classroom. Clayton said that even though she misses growing up eating in the cafeteria, she thought too that it was time for a change.

Not only has eating lunch in the classroom helped monitor behavior and if the kids are actually eating their lunches, but the district has also changed the menus, and decided to only do sack lunches instead of hot lunches. This has reduced congestion and loud hallways when other classes might still be in the middle of lessons.

Clayton stated that when kids went to the cafeteria to eat, she felt that the wrong message was getting across to the kids and that it was “be as noisy as you want, it’s your break” time. She explained that eating in the classrooms allows her and other students to not feel rushed because they may have a lesson planned after lunch not the usual recess time. Therefore, kids aren’t in a hurry to finish, and teachers have the ability to decide when recess should be granted to those with full stomachs.

Corrigan stated that he preferred to have afternoon recess after a lesson plan because it can prevent the kids from getting cramps and allows their food time to settle. He also said having recess after a lesson plan makes him feel like he’s getting rewarded for finishing his work. The change has affected everyone differently, including the teachers.

“There was no real conversation as to why we went to this system in the first place,” said Scot Wavra, 4th and 5th grade teacher at Willamette Primary School. Wavra said that he would have liked to have been involved in the first place. He mentioned that his students’ started eating in the classrooms last year and the decision to do this was entirely the students’. Now the kids have a longer time to eat and eating in classrooms has made lunch time a more calm environment.

Clayton said that her teacher prefers the students to wash their hands instead of using hand sanitizer, which will greatly decrease the amount of time students spend away from school sick. When asked about the cleanliness of cafeteria tables and classroom tables, she said “there’s been food, pencil lead, eraser shavings, kids’ hands, all over the cafeteria tables as well, there’s no difference.”

Because the district has decided to provide only sack lunches to the students’, Hoover mentioned that the food hasn’t been that good and the only thing he likes are the cookies.

There is an advantage to having kids in their classrooms during lunchtime. Now the district has made the lunches with a fruit or veggie, whole grain, protein and a choice of milk or juice. Eating in classrooms has also reduced congestion and not providing hot lunches has saved the schools money that can now be used towards school improvement projects or teachers jobs.

This is a great change that the school district has made the classroom is cleaning up the tables thoroughly every day after lunch. The score is tied: healthy lunches and happy kids.