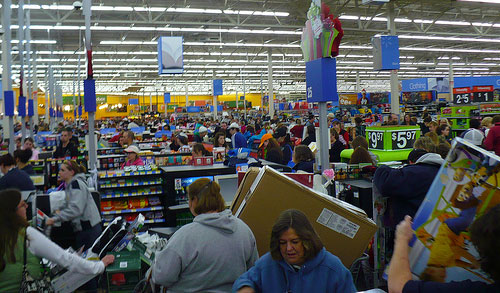 Hi-definition televisions for $200, hot video games for $30, and DVDs for only $5: these are only a few of the deals that stores will begin to offer on Black Friday. A good shopping deal is a dream come true—but is it worth it? On Friday, Oct. 25, millions of bargain hungry shoppers will head to their nearest Wal-Mart, Best Buy, Target, or other local department store, and pay huge amounts to mark the grand opening of the holiday shopping madness which will dominate the rest of the year.

Black Friday is known to be a cultural “holiday” which celebrates spending and splurging, but in recent years it seems to have become more of a competition than anything. While the sales are literally to die for, I will definitely not risk braving the insane crowds and shopping madness this Black Friday.  Shoppers can be greedy and sometimes even lethal. In 2008, there was a stampede at a Wal-Mart in New York and a man was trampled to death.

Many stores are opening their doors at midnight, and some even on Thanksgiving. Wal-Mart will release its doorbuster sales at 10 P.M. on Thanksgiving night, and Toys’ R’ Us at 9 p.m. These retailers are proof that Black Friday is becoming a bigger event each year. Last year, only a few stores opened their doors at midnight, and most opted to begin their sales Black Friday morning. Stores are definitely opening earlier and hoping for bigger sales this Black Friday due to our nation’s economy, but this creates an increased risk of hazard as well.

More time for sales means more working hours for employees. This has increased a great deal of stress for those who have to work 13 hours or more.

If retailers really want to create a Black Friday which is beneficial for both shopper safety and sales, they should take more precautions to ensure public safety with zero risk of danger. Nobody wants an unsafe shopping experience, but when the stakes are high, people can resort to dangerous, even primitive behavior.

There is no doubt that Black Friday will offer mouthwatering sales, but while standing in line, take caution and prepare yourself: the shopping craziness may look fun, but it can also turn dangerous.