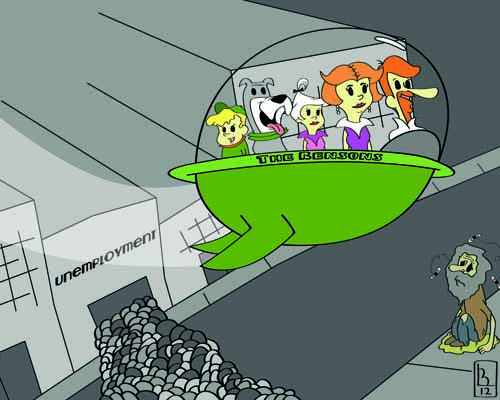 Flying cars, spaceships and people living on the moon are just some of what inventors in the 1950s said that by this time we would have. What we really have is a crashed economy, a high unemployment rate and many people left homeless. If I were to try predict the next coming decade as the 1950s inventors did, it might not be very scintillating.
Many people are too young to remember the inventing elation of the 1950s. Advertisements for the future included undersea colonies and the self-driving car just to name a few. In the book “Your Flying Car Awaits” by Paul Milo it also mentions space homes, fossil fuels being eliminated, and medical advances beyond comprehension. These also have yet to come into the world.

Over the past 50 or so years, technology that will change the way we live forever has been promised. Although there have been some technological advances in the past six decades such as the internet, it was not the extremes that inventors predicted. When society is promised something, inventors need to come through with it and not give us false hope. I’m just as likely to trust a little child about technological advances, as I am world leaders and big technological companies.  I would like to see the technology that we have be used for finding clean energy and for applying the upcoming sciences in the classroom, such as interactive textbooks on iPads.

“Your Flying Car Awaits” is a book about all the things that the world and society has promised us over the past 100 years or so. It makes the point that the items that the inventors of the 1950s have promised us are still sci-fi dreams because they will not directly improve our society. If they spent the money on things that matter such as ending hunger and providing health care, that would be more beneficial. Milo also says that people don’t want to fund things that they can’t use; that’s why the travels in space have slowed down so dramatically. People want to spend money developing something they want to use. Society and inventors need to create and imagine things that would improve people’s lives, or something that the people can actually use.

Apple, Microsoft or other companies may argue that they are making progress and doing things we couldn’t have done 50 years ago, and that’s true. Just look at things like the iPad and the internet. But they have not come through with other things they promised such as the flying car. It was said a “dad hovering in his driveway in his sky car” would be a common sight in the 21st century. The new predictions for the next coming decade in terms of technology are 3D printing as a mainstream consumer product, and teleportation of simple molecules. I feel like these will not be practical to come true in the next few years.

We all have been misled, often by people that don’t have any personal connection to us. This over-promise of technology is something that affects everyone, from presidents to school boys, from athletes to academics. The way that technology shapes our lives today, with what little there is, and the success of these things­­ – flying cars, people living on the moon, and cites underwater – will determine the qualities of our lives.

There are solutions to this problem: we have  to stop promising things that can’t be fulfilled or at least come close to. If one goal is set– say in 20 years we will have self driving cars,–and they focus on that one thing. Then when they complete it, the people will trust them more. Also, they can show us proof that their “out of this world” ideas have a possibility of coming into reality and give a more appropriate timeline.

Although there is still hope for some of the ideas of the 1950s to happen, there seems to be a disconnect with the 21st century’s innovators and their priorities. In ten years the world may have this amazing technology that has always been in American inventors’ sights, or there may be little improvement to lives of the people. I hope, for the good of the people, that inventors and companies will keep their goals and dreams practical.