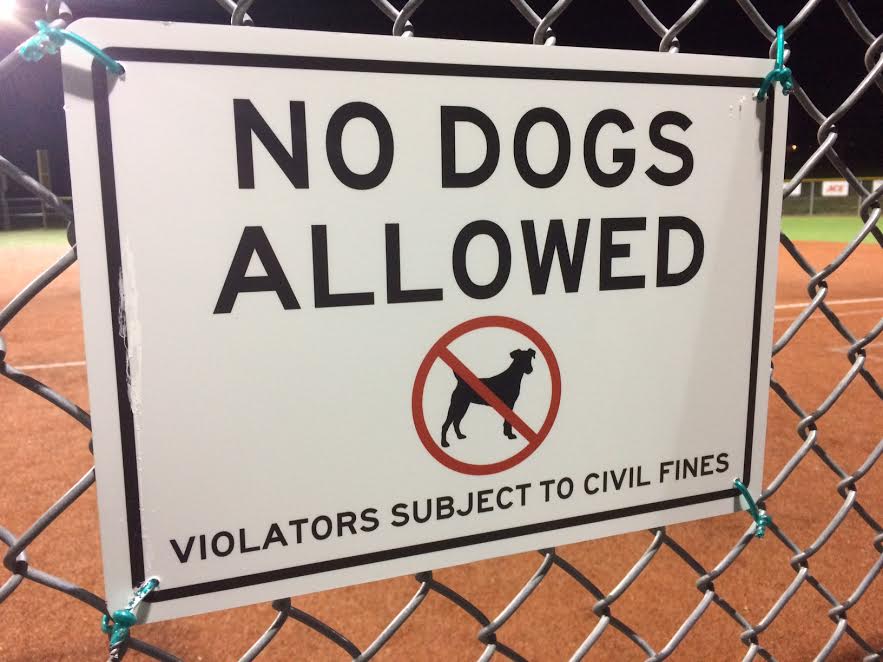 A warning posted to sports fans that dogs are not allowed in certain athletic areas around West Linn. In Eugene, Ore., a ban has been put in place increasing the repercussions of having a dog in their downtown area.

A day filled with back-to-back tests and afternoon activities is typical for teenagers, and it can be comforting to come home to a loving pet. In many people’s lives, a pet is the equivalent of a sibling, or is simply their best friend.

“My cats mean an almost ridiculous amount to me,” Elise Hlady, junior, said. “They’re honestly like my siblings.”

Dogs are a great companion to help relieve stress or even just be there to show support. In Eugene, Ore., a temporary ban has been set in place against dogs in the downtown area, limiting the places people can take their dogs. After multiple incidents of dog aggression, mentioned in an article by KGW.com the city saw that a ban was the best solution for the time being.

“I think they should just require leashes and then deal with hostile dogs when there is a problem,” Claire James, sophomore, said.

As a dog owner and a high school student, I take my dog to all of my after school activities, and considering the possibility of him not being allowed has never even crossed my mind. I think it is unfair to place a ban on dogs in a public place. Although the city is allowing exceptions for nearby residences’ dogs, service dogs and K-9 dogs, I think it takes more away from those who own dogs than those who feel threatened.

Monitoring this new policy may come as a challenge for officers. During the first day of the ban, people were mostly just being informed of the new rule by being warned by police officers. Now, if a dog owner is found violating the new ban, fines can range from $100 to $250.

“I would move to a place where my dog could be with me instead of living with a ban on him,” James said.

Although the ban has only been set in place for a six month trial, it seems like more work to officers than dealing with problems as they arise. A dog owner can easily claim to live nearby when walking their dog downtown, and it would take police more time to check than to just let them on their way.

I think it is in the best interest of police officers and dog owners if they use the trial ban as a warning and then find a new way of handling aggressive pets in the future.