The truth about today’s teens 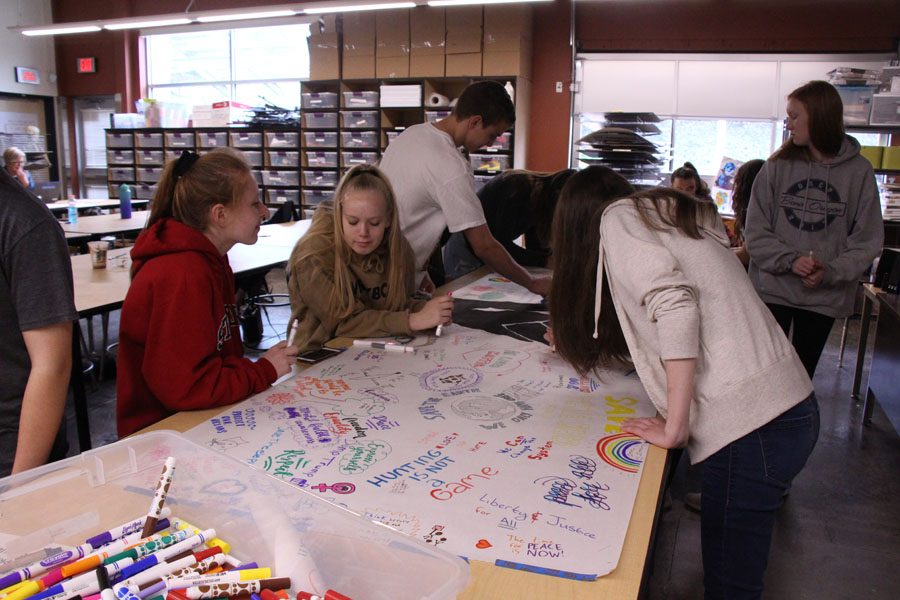 Expressing themselves with bright colored pens; students create a protest art poster. This workshop titled “Art Expression” was also available last year, where students also made a poster, which has been hanging in the Honors Humanities classroom ever since. Ireland Johnson, senior, and Kendra Frankle, senior, led the workshop both years. “We started it last year for Unity Day, and at the time there was a lot of rep around protests being really bad, people were not really understanding what they were and what they meant, we wanted to spread awareness and teach people what protest is, and how it is not just some terrible thing, it doesn’t turn into riots all the time, it actually is important.” Frankle said, “People should stand up for what they believe in.”

There are many misconceptions that adults have of teenagers, specifically from older adults. They think that every teenager is the same: rude, selfish, spoiled, and disrespectful. They think that just because a person fits into the group of humans that is between 13 and 19 years old, they immediately transform into this teenage monster.

This stereotype has been long in the making. Look at the cover of any fashion magazine and you’ll see a thin, big-breasted teenage girl wearing tight, form-fitting clothes and probably biting her lip sexily. This image is what people think about when they think about a teenage girl. However, it only applies to about one percent of the teenage population, if that.

So why do adults think teenagers are so, well, immature?

One of the most widespread misconceptions about teenagers is that we don’t know how to communicate. But that’s absolutely untrue. It’s not that teens don’t know how to communicate, it’s just that we do it differently than most of the adults in our lives. We text, call, FaceTime, can communicate over Facebook, Instagram, Twitter, Snapchat… you name it, we use it. Communication has evolved. Teenagers have evolved with it. But that doesn’t mean that we can’t communicate face to face. Ever seen a group of gossipy teenager girls at lunchtime? Or two teens on a date? We don’t need a screen to hold a conversation. But if there is one, at least we know how to use it.

Another common misconception is that today’s teens are ignorant and aloof to the world’s problems. I do know some very ignorant teenagers, but most teenagers are extremely well-informed about current events! Many teens watch the news with their parents, read news articles online, get news on social media, or discuss current topics with friends, just for fun. At WLHS, for example, there’s a lobby club, a debate club, a government class, several civics and humanities classes, and so many more classes and clubs that I can’t count them all. So no, not all teenagers are ignorant. The majority of them do care about current events. And some even care enough to take to the streets in protest.

And finally, people assume that we’re spoiled rotten. I won’t hesitate to admit that our generation is a little bit spoiled. The fact that, especially in rich white suburban West Linn, we have more money and get bigger gifts than other generations do. The majority of us seem to have iPhones and cars and designer clothes that seem to just float into our waiting arms. But that’s not at all how it works. Things are expensive! And the minimum wage is still pretty low. Many teenagers are working at least one job, juggling school and extracurriculars, and spending time with their families. And college is so expensive, all of our money goes straight to that and we still won’t have enough. Today’s teens aren’t spoiled – we’re incredibly hard working and trying to earn everything that we’re given.

It’s terrible to have to face all of these misconceptions about today’s teenagers, but you’ll find them everywhere you go. However, being aware of them will shape your actions so that you can disprove these negative views that so many people have about teens. This world is outdated and is facing troubling times, and we are the generation that’s going to fix it for the future. Well, as soon as we pay off those darn student loans.