The recycling revolution needs you 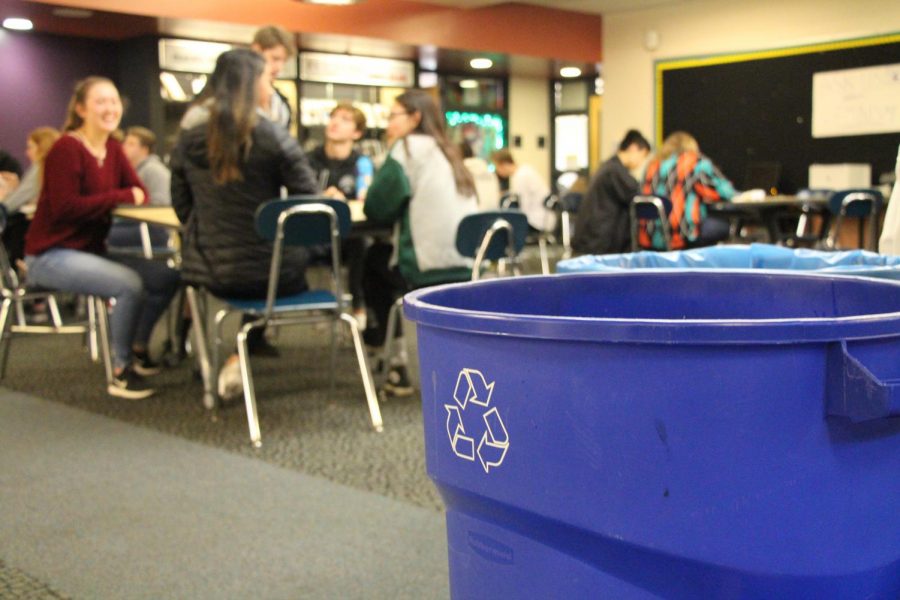 The recycling bins on lower A porch

The silent killer is among us. It’s easy, cheap, and conveniently deadly. It sneaks into our homes, into our seas, into our food, and into our own bodies. It kills us from the inside out, but no one notices. The microplastics are everywhere, and no one seems to care.

But there is a resistance. The recyclers are everywhere, leading the world in waves of green. And our school itself is a stronghold. Ecology teachers Geoff Bingham and Jim Hartmann lead our recycling program, and they are creating a greener community one plastic bottle at a time.

The field ecology classes, led by Bingham and Hartmann, are in charge of getting the recycling from the classrooms to the curb.

“I send out an email to all the teachers, telling them to put their bins outside their classroom,” Hartmann said. “My field ecology classes pick it up, put it in the rolling carts, and put it out there for the trucks to come.”

The trucks then come to the school and take the recycling to a recycling sorting facility in Oregon City, where workers sort it into piles of different materials.

Because the Oregon City facility does all the sorting, high school students don’t have to separate their recyclables. “It’s pretty easy here in West Linn because we don’t even have to sort [the recyclables],” Bingham said. “It all goes in the recycling bin, so you don’t have to pull your plastics out from your cardboard or paper products. Recycling has never been easier.”

The problem with this system is that not everything people put in the recycling bin is actually able to be recycled. For example, recycling’s worst enemy is the plastic bag. If a plastic bag ends up in the recycling, it will get stuck in the wheels of the conveyor belt and jam up the system, causing the workers to have to disassemble and reassemble the machine just to get it running again.

But if plastic bags get put into a landfill, they are often blown away because they are so lightweight. From there, the plastic can eventually clutter around drains and enter rivers and the sea.

“Plastic hangs around forever,” Hartmann said. “All this stuff ends up in the ocean. Even if it doesn’t kill animals directly, it breaks up into tiny little pieces and it’s working its way up the food chain. You can find microplastics in human poop.”

The solution to this problem is simply to ban plastic bags. “A lot of cities are banning plastic bags,” Hartmann said. “Portland has done that. But of course, West Linn hasn’t.”

When you’re at a grocery store, ask for a paper bag, which is 100 percent  recyclable, reusable, and biodegradable. Or even better, just buy a reusable one.

“We’re becoming a throwaway society, and it’s all for convenience,” Bingham said. “Think about how many people buy brand new plastic bags, and then throw them away after one use. Buy a nice reusable bag for five bucks and you use it for years.”

Another way to help the environment is to make sure you recycle recyclables and throw away garbage.

“There are still challenges with kids throwing garbage in the recycling and vice versa,” Bingham said. “We make fun about how easy it is, and yet you can walk over to the garbage and pull out recyclables. They need to stop and think for half a second before they just toss it in the garbage can.”

In addition to that, make sure everything you put in the recycling is actually recyclable. “My students will still reach in and pull a gross half-eaten hamburger out of the recycling bin,” Hartmann said. “The worst one is probably those glass bottles with milk and coffee from Starbucks. People drink two-thirds, put the lid on, and throw it in the glass recycle.”

Recycling is easy to do and can make real a difference to the environment. “Recycling is a nice easy step,” Bingham said. “Folks can feel like they’re doing their part. And I think it’s something everybody can control.”