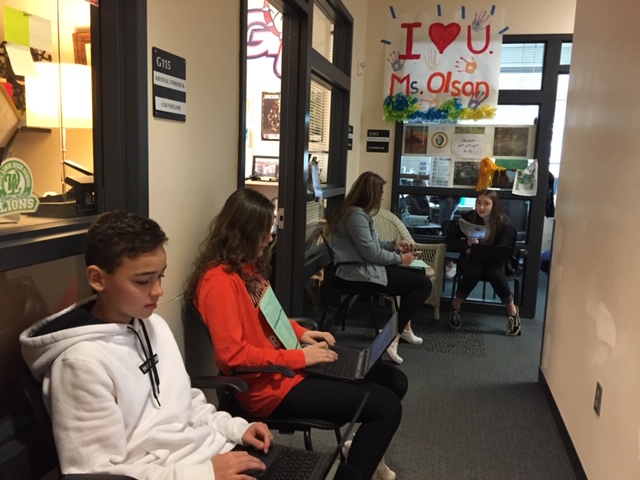 Students from Conor Greaney's freshman English class wait to forecast for their next year of high school.

It’s easy to imagine the future. Whether life after high school seems ages away or just around the corner, since it has yet to happen, people can shape their reveries around whatever they want it to look like. As the year rounds into March, forecasting for the next year is also approaching. For some students, college is on the horizon, which means the diligent work of sculpting the perfect transcript is already underway and has been for years.

By high school, many people have a general idea of what colleges are looking for in their future students. Things like extracurriculars, test scores, GPA and class difficulty are among the factors that make up a college application. With this, AP classes are a positive booster to college transcripts, however, this can lead to students burdening themselves with more work than they can handle, with the expectation of attending a prestigious university.

There’s a balance of thinking about the future, and planning for that, but also enjoying the moment that’s taking place right now. When students overload themselves to the point where every ounce of their time is completely devoted to their AP classes, it becomes difficult to explore other interests, hobbies and activities in their lives.

“We have students all the time that are just stressed out and they’re pulling their hair out because they can’t balance the six AP classes they signed up for junior year,” Greg Bean, guidance counselor, said.

For students taking numerous AP classes or other challenging courses, part of this comes from the hope to get into the best possible university, whether that be an Ivy League school or another top college.

“The Stanfords of the world have 40,000 kids applying and they take two,” Bean said.

When students are completely focused on attending an Ivy League school, it becomes difficult to consider the other quality schools that are available to them.

Steve Jobs is a classic example that Ivy League colleges don’t always equal success. Jobs, the founder of Apple, attended Reed College in Portland, Oregon. With an estimated net worth of 10.2 billion at the time of his death, not only did he chose against attending an Ivy League school, but he ended up dropping out of college all together after his sophomore year. Brilliant minds are found in every aspect of society, not just elite universities like Stanford, Harvard or Yale.

An article published by the Washington Post estimated that there were approximately 5,300 colleges in the United States alone as of 2015, which excluded universities abroad. Only eight of these are considered a part of the Ivy League, consisting of schools like Brown University, Columbia University, Harvard, Yale and Princeton.

With such a plenitude of colleges, why do students still feel the need to get into these elite schools?

“I think some of that is a product of living in a community where the majority of the parents are college educated,” Bean said.

A study by the National Center for Education Statistics found that only 33 percent of students whose parents did not attend a postsecondary education between  2011-2012 enrolled in college themselves. Economic and social reasons were often contributors, but outside of this, college was simply not expected of them.

If the student is living in a household where their parental guardian has not attended a university, there is no pressure or standard to live up to. These students are more likely to explore other jobs that do not require a four-year degree.

On the other side of this, students whose parents did attend university were more likely to enroll in college, specifically elite schools like ones in the Ivy League, with the intention of impressing their parents.

For a high schooler trying not to disappoint their parents, the acceptance into an Ivy League school can feel like the only way to prevent that.

“And so what they’re doing to themselves,” Bean said, “Is they’re saying, ‘Well OK, so everybody that’s got into Stanford this last year, their average GPA is a four-point, and they’ve got this kind of profile of kids that have taken a bunch of AP classes. So from their perspective, they don’t have a chance of getting into Stanford without taking those AP classes.”

For students that want to attend Ivy League schools such as Stanford, taking AP classes can feel like the only option to improve their chances of getting accepted.

“The lower the percentage of getting into a school, the more they feel like they have to load the plate to be competitive in that world,” Bean said.

“So what our take on this is, great, but take classes that you find enjoyable,” Bean said.

“It’s not like having twelve AP classes is going to be better than having four. It may show that you’re able to handle the rigor more, but if they’re all over the place and not connected to something that you really want to explore, I think they can see that.”

When students plan for the next year of high school, AP classes are a requirement if they’re considering applying for honor grad, but this program won’t be a problem for incoming classes.

“We actually in this last year–this may not be something that everybody’s aware of–that your class as a sophomore coming through is the last class that can earn what’s referred to as honor grad status,” Bean said. “We’ve gotten rid of honor.”

One of the requirements to earn honor grad status was that students take six AP classes, where two of them had to be from math and science, two had to be from the arts and the other two were chosen.

“We were always in this kind of situation where kids were taking classes that they weren’t necessarily excited about taking,” Bean said.

With forecasting presentations for each grade during the end of February, students are left to consider the next year of their high school experience, and whether or not to include AP classes in the schedule.

“Our general message almost every single time is if you’re interested in the subject, take it,” Bean said. “So you’re not going to hear us say that you should take an AP class unless it’s something that you really are interested in, or it might have to do with you kind of exploring what you might want to do in the future.”

Even though AP classes may feel like the only way to compete for a spot at an Ivy League school, it’s not worth students overloading themselves to take classes they won’t find enjoyable or interesting.