From razorblades and line tape to nearly all web-based: Amplifier through the ages 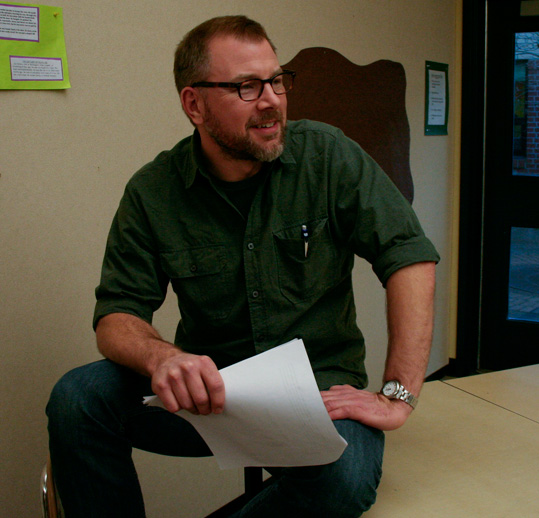 The Amplifier has seen its fair share of changes, beginning 90 years ago in an entirely different technological age. Graeme Sandell, Language Arts teacher at Rosemont Ridge Middle School, worked on staff of the Amplifier during an era that was unlike those early beginnings or the present day.

“We did have the old Macs with the PageMaker program,” Sandell said. “But once things were printed up, it was razorblades and paste and line tape. The digital world wasn’t what it is today. We would paste down pages and ads and articles, paying attention to placement, preparing everything to go off to printing press. It was craftsmanship without the computer to do it all for us.”

Now, the Amplifier is almost entirely web-based, and when a print issue comes out, the PDF is uploaded Western Oregon Web Press, where it is printed and received again ready to be handed out. The photographs taken by today’s staff are all computerized as well, as they are taken on a digital camera and uploaded directly onto the computer. According to Sandell, on staff from 1986 to 1988, photography was much different then.

“In the days before digital photography, most of the job would involve the actual work of developing film and making prints to glue down on the layout pages,” Sandell said. “My memory may be over-exaggerating a bit, but I remember spending long hours in the darkroom, making prints and finishing the jobs of others.”

During Sandell’s reign on staff, not only was technology different, but the school was also in an entirely different shape.

“When pages and ads were printed in the Mac lab, we would have to run it to the other side of the building to lay it out on the big tables in the Amplifier classroom and office,” Sandell said. “There seemed to be a lot of running back and forth from one side of the building to the other. Today, that hall space is filled with the school library, but back then, it was a labyrinth of a hallway.”

According to Sandell, working for the Amplifier was a fulfilling experience in many aspects. It has been something that has followed him throughout his life, and has made a difference to him.

“Amplifier affected me in many ways as I did major in journalism.” Sandell said. “I think that the writing was the biggest part, though. The more writing you do, the more improvement you start to see.”

Not only did Sandell develop a relationship with writing in his life, but also sees it play out in his current teaching career. Students work the same way: the more they write, the more skilled at it they become.

Another way that Sandell was fulfilled by working on the Amplifier staff was the sheer sense of accomplishment and the many perks that he enjoyed.

“I have to talk about the desire to feel a sense of autonomy, mastery, purpose and community,” Sandell said. “I got a taste for those things working for the school newspaper, and I wanted to feast on that type of atmosphere in life.”

Sandell looks back on his career as a journalist in high school fondly, with no bad memories coming to mind. He sees the Amplifier as a rewarding activity that appealed to his instinctual desires.

“In the book Drive by Daniel Pink, he argues that humans are complex creatures, motivated by more than rewards and punishments,” Sandell said. “We want autonomy, mastery, and purpose. I would argue that ‘community’ could be added to that list as well. Working on the Amplifier was one thing I found in high school that tapped into those internal human drives.”

Though Sandell merits the current-day Amplifier on the web, he still credits the old way of doing things—physical newspapers to pass around—for their simple feeling and the fulfillment he received in helping to produce them.

“[Having an online newspaper] is sad, though, because there is such an organic feeling to picking up a newspaper, holding it in your hands, and turning through the pages,” Sandell said. “That feeling is elevated when you know you had a part in creating that finished product. You can hold your achievement in your hands and see the ink rubbing off on your fingers. You can’t sneak in and correct any mistakes, like you can with web based media. You have to take it for all its warts and its glory.”